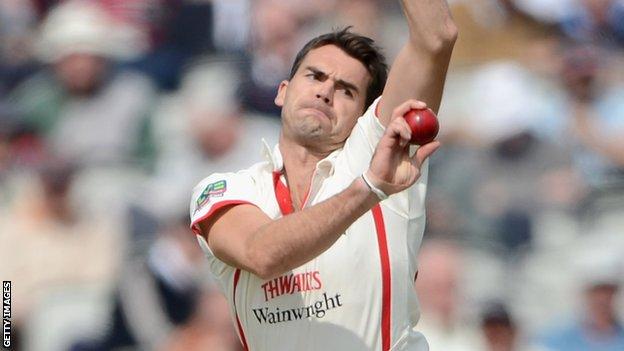 England paceman James Anderson took two late wickets as Lancashire seized control on day one of their fixture against Kent, who closed on 216-8.

Anderson (2-48), in his first Championship game since last May, got rid of Mike Powell (57) and Matt Coles after going wicketless for 18 overs.

Team-mate Kyle Hogg took the first two to fall on his way to ending with 3-32.

Kent's main resistance came from Powell and Brendan Nash (50), who made his third successive half-century.

Nash and Powell frustrated their hosts for most of the afternoon, enjoying a 70-run stand before off-spinner Steven Croft caught Nash lbw just before tea.

"I enjoyed batting with Nashy, but it was tough going out there," said Powell.

"The Lancashire bowlers know their pitch and they have got control of the match at the moment."

"Tight bowling from Lancashire, but Kent can be relatively pleased with their progress in difficult circumstances.

"They were made to fight for every run and, after weathering the early barrage, looked to be getting away when Nash and Powell shared a third-wicket partnership of 70.

"But Lancashire struck back, removing Nash after he reached his third consecutive Championship half-century and later Powell, who looked in good touch.

"Sadly, Daniel Bell-Drummond, who many Kent supporters see as an exciting prospect, was out cheaply in his first Championship appearance of the season."