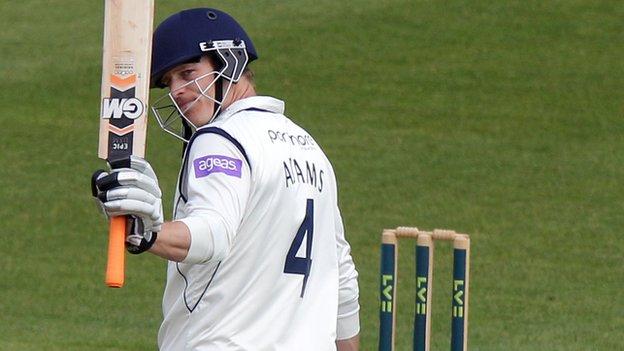 Hampshire captain Jimmy Adams led the way with a chanceless century as Worcestershire's attack were made to struggle at Southampton.

Adams batted throughout the first day to finish on 150, registering his 17th first-class hundred just before tea.

Australian opener Phil Hughes has, as expected, been selected for the 2013 Ashes tour party. He had originally been earmarked to return to play for Worcestershire this summer, but his form at New Road in 2012 (560 runs in nine Championship matches, 402 in eight Twenty20 games and 498 runs in nine CB40 innings at 83.00) earned him a winter Test recall

Moeen Ali claimed three wickets with his off spin, but the visitors' best bowler was once again Alan Richardson.

As ever, Worcestershire's most used bowler had to wait until the 22nd over of the day, half an hour before the close, until he claimed his first wicket.

But figures of 1-45 from 25 overs were as tidy as ever from the old warhorse, who is now only 10 short of 200 first-class wickets of Worcestershire, in only his fourth season.

Richardson also held onto the catch that got rid of Vince, who was looking for a third successive century, having already made tons against Loughborough MCCU and Leicestershire this season.

Vince also made a hundred in the final first-class match of last season against Division Two champions Derbyshire.

"Hampshire are in a commanding position after the first day, thanks to Jimmy Adams' hundred and some average Worcestershire bowling before lunch, Richardson excepted.

"Hampshire lost wickets steadily throughout the afternoon and Adams said afterwards that the perfect day would have to have been only four or five wickets down."

"Worcestershire's pre-lunch bowling, Richardson apart, set the tone for the rest of the day, as Adams and Carberry dipped their bread.

"After his dismissal of Carberry, which came out of the blue, Moeen Ali was then taken off after two overs, which was a little puzzling.

"Adams didn't give a chance all day but Vince threw away a big score with a rash shot as Worcestershire did make a fight of it after tea - but chasing a big score and batting last will not be easy."