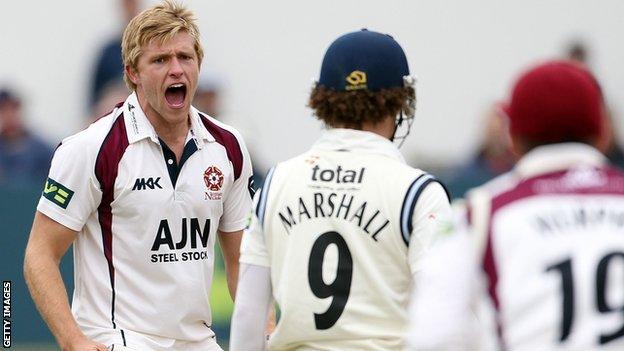 David Willey's four-wicket haul helped Northants dismiss Gloucestershire for under 200 on day one in Bristol.

"It was left to Gloucestershire's 18-year-old wicketkeeper Cameron Herring, in his maiden first-class innings, to see his side reach a total that could still be competitive.

"Herring added 33 for the last wicket with Liam Norwell, with the number 11 only contributing eight.

"The Welshman belied his lack of experience by farming the strike and riling the Northants attack, when a total of less than 150 looked on the cards.

"Herring wintered in Australia and it showed as he gained in confidence, hitting David Willey for three consecutive fours."

"Northants will justifiably consider themselves on top after day one, but Herring's resistance means they've had to work harder here than at any point so far of the fledgling season.

"Willey and Copeland's new-ball control was again exceptional, but Peters' dismissal for 34 means Wakely and Newton must step up if Northants are to set up a winning position on day two.

"Northants will be disappointed not to win from here, but the job isn't done."