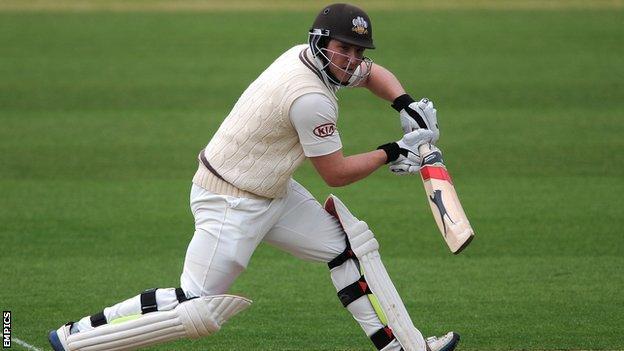 Gary Wilson scored a century before Surrey suffered a mini-collapse to close day one against Sussex on 301-7.

South Africa captain Graeme Smith was dismissed for three and is yet to reach double figures this summer.

With the hosts on 247-3, Wilson's downfall for 124 then sparked a collapse as they lost four wickets for only 30 runs.

Sussex seamer James Anyon took 3-69, while Vikram Solanki (51) hit his first half century for his new side.

The former Worcestershire captain shared a third-wicket stand of 118 with Wilson, who compiled the second first-class century of his career.

Wilson arrived at the crease after Smith had gloved a brutal lifting delivery from James Anyon to Sussex keeper Ben Brown.

The Irishman had expected to go in at seven, but was promoted to three just before the start of the innings, after Arun Harinath was struck on the hand in the nets.

Wilson's dismissal led to a Sussex revival in the final session as overcast conditions and the second new ball helped the visitors pick up four wickets for 30 runs.

"Sussex forced themselves back into the opening day in the final session as they used the new ball very well.

"This was after Gary Wilson scored a magnificent century under pressure. The Irishman had to use all his skill and technique under pressure, partnered by Vikram Solanki.

"But Sussex then picked up five wickets after tea as the quick men used the new ball cleverly and Surrey closed a pulsating day on 301-7."

"Advantage Sussex but only just, after an enthralling day of fluctuating fortunes at the Oval.

"Having won the toss Surrey will be slightly disappointed to have surrendered an excellent position of 181-2, but the visitors made good use of the second new ball, with Anyon, Magoffin, and Chris Jordan, on his return to the Oval, sharing the wickets.

"Sussex skipper Ed Joyce rotated his bowlers effectively throughout the day, and although the seamers took the wickets, it was Monty Panesar bowling with excellent control and variation, who was the pick of the Sussex attack."