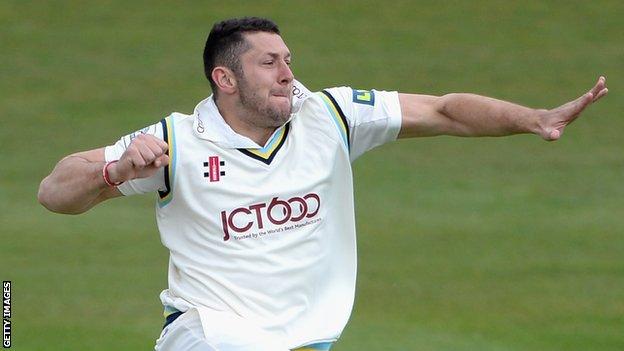 Tim Bresnan staked a claim to be part of England's Test plans for the summer by taking 4-41 on the opening day of Yorkshire's away game with Durham.

Durham were looking for an improved batting performance after their top four contributed only 99 runs between them in their opening two games and although Jennings and Mark Stoneman were both back in the dressing room with only eight runs on the board, the third-wicket stand between Smith and Benkenstein provided some encouragement.

It was ended by pace bowler Bresnan, making his first Championship appearance of the summer, who had Smith caught at long leg by Ryan Sidebottom and then removed Ben Stokes in the same over, before bowling former England team-mate Paul Collingwood with an inswinging delivery for a duck.

Durham slumped to 112-7, but Mustard oversaw a partial recovery, hitting a six and nine fours, with support from Callum Thorp (21) and Graham Onions (27) to eke out a batting point before he was last man out, bowled by leg-spinner Adil Rashid in his 100th first-class match.

Onions, one of Bresnan's rivals for a place in the England squad against New Zealand, forced Adam Lyth to play on from his fourth delivery and then ran out Phil Jaques after Root set off for a run, then changed his mind, before returning later to end a 44-run stand between Root and Gale by having the latter leg-before.

"Yorkshire closed day one on 57-3, losing captain Andrew Gale for 25 on the final delivery of the day after he had passed the 5,000 first-class runs mark in the process.

"Earlier Durham were all out for 237, with Phil Mustard's 70 keeping the innings together when they had been 112-7.

"Mustard helped to put on 125 runs, doubling the score with the last three partnerships. That could prove vital in the greater scheme of things, but I would say after a day of twists and turns it's honours even."