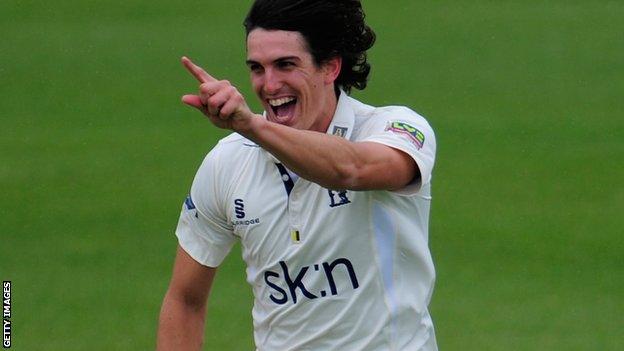 Seam bowler Wright picked up three early wickets as the visitors plummeted from their overnight 11-1 to 37-6.

Scott Borthwick (19) and Callum Thorp (12) soon fell to Wright after lunch, but Phil Mustard resisted for over two hours to delay Warwickshire's victory.

He was last man out, caught at point by Laurie Evans off Chris Woakes for 28, as Durham were dismissed for just 94.

Having begun the season with a confidence-boosting win over Somerset, the meekness of the north east county's batting was a disappointment, but they appeared to be caught cold after Mark Stoneman edged Wright to wicketkeeper Tim Ambrose in only the third over of play.

Will Smith (15) was the only batsman in Durham's top six to reach double figures as Wright, Keith Barker and Woakes, who had Durham skipper Paul Collingwood caught at second slip for five, wreaked havoc.

A seventh-wicket partnership of 24 between Mustard and first-innings centurion Borthwick was the highest of the innings and it looked like Wright might better his career-best figures of 6-22, achieved while playing for Essex.

A seventh victim eluded him, however, as skipper Jim Troughton turned to Jeetan Patel's off-spin and the New Zealander had Graham Onions caught by Will Porterfield for a duck before Woakes (2-13) finished things off in the next over with Mustard's wicket.

"We were ultimately well beaten," Durham coach Geoff Cook admitted. "It was still a good wicket but Wright was strong and knocked the stuffing out of a top order still trying to find its feet.

"It would have been nice to see one of those guys see the new ball off to give the others a base. These fellows can all bat, but they have got to be given the time and the support to try and get their game going."

"Last season Chris Wright and Keith Barker were a most effective bowling partnership for Warwickshire and there was evidence here that they might repeat the trick in 2013.

"During the morning they were relentlessly accurate, probing the weaknesses of Durham's brittle top order and rarely allowing them any respite. Wright cleaned up with six wickets, and the support bowling ensured there was no possibility of Durham escaping as they did in the first innings.

"This match turned decisively in Warwickshire's favour on the third afternoon when Tim Ambrose and Rikki Clarke batted with great authority and after being held back by the weather last week, the Bears showed they are well-equipped to make a strong defence of their title."

"This was as one-sided a day as I can remember witnessing on a cricket pitch. For a long period, Durham looked like breaking the record for their worst score in a championship match - 67 v Middlesex. The fact they avoided that was of little comfort.

"They were simply blown away by Chris Wright, who is certainly one to watch, and their score of 94 was their lowest against Warwickshire.

"There are clearly worries at the top of the order. Between them, Mark Stoneman, Keaton Jennings, Will Smith and Dale Benkenstein have scored a total of 99 runs so far this season."