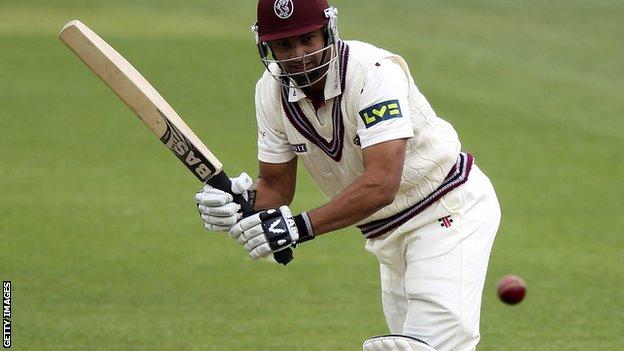 Alviro Petersen and Jos Buttler fell just short of centuries for Somerset as their game with Surrey ended in a draw.

Petersen, however, looked all set for his second hundred of the game when he was caught off Gareth Batty for 91.

He put on 111 with Buttler, whose exit for 94 prompted a declaration on 251-9 that brought the game to an end.

"The boys dug deep, especially Petersen and Buttler just when they had to. As a group we are definitely moving in the right direction," said Somerset director of cricket Dave Nosworthy.

After a first-innings duck, England opener Compton would have been looking for time in the middle at the start of play ahead of the Test series against New Zealand, but he had only reached 16 when Meaker removed his off stump after earlier seeing Somerset skipper Trescothick superbly taken by Gary Wilson at second slip.

James Hildreth was dropped off Batty, but the off-spinner soon trapped him lbw for 21 and when Craig Kieswetter followed in similar fashion to Zander de Bruyn, having made only a single, the visitors found themselves on 82-4.

A collapse would have opened up the possibility of a Surrey victory, but Petersen and Buttler snuffed out the danger with some disciplined batting in a partnership that took up 30 overs.

Petersen hit a six and eight fours in almost three hours at the crease before being held at short leg off Batty and Meaker then cleaned up Peter Trego, his 150th first-class victim, Alfonso Thomas and Jamie Overton in quick succession.

Buttler raised his tempo as George Dockrell dropped anchor at the other end, but after hitting Gary Keedy back over his head for six, he picked out long-on in the same over and a halt was called.

"Stuart Meaker bowled his socks off and his efforts almost set up a final session run-chase for Surrey.

"But Alviro Petersen and Jos Buttler both played very well and the draw was a fair result.

"Both sides will take positives into their games next week."

"It was a strange sort of day as there did not seem any chance of a positive result at the start, but when Trescothick and Compton were dismissed cheaply, Surrey sniffed a chance.

"When Petersen was sailing serenely along it looked like that opportunity had gone, but when he was out unexpectedly that chance reappeared and it took some disciplined batting from Buttler and George Dockrell to steady any lingering Somerset nerves.

"Dave Nosworthy will take quite a few plusses from the four days on a benign pitch, not least the attitude of his team when they were up against it, both with bat and ball."