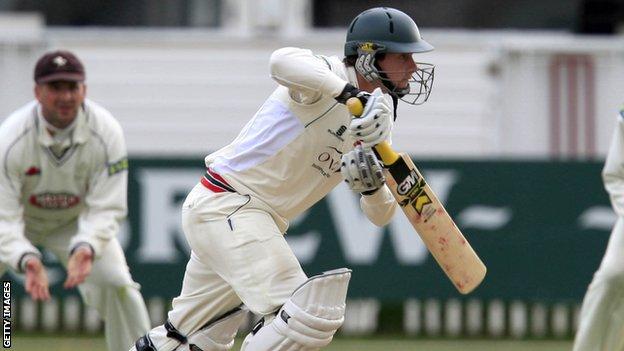 Matthew Boyce hit a career-best 136 and Shiv Thakor was unbeaten on 105 as Leicestershire reached 452-7 at the close after the pair had put Kent to the sword on day three at Grace Road.

Resuming on 250-5, Boyce and Thakor shared an impressive stand of 181.

The partnership was finally broken when Boyce was trapped lbw by Brendan Nash.

Fast but not fast enough

Matthew Boyce and Shiv Thakor scored at just shy of four an over in their 181-run stand but, prior to their coming together, Leicestershire had taken 82 overs to get to 250. And, at 110 overs, they were still on 328-5, still 22 short of securing a fourth batting bonus point

After being run out backing up on day two, Kent's Sam Northeast then ran out Jigar Naik moments before rain and bad light ended the day 90 minutes short.

The dismissal of Ramnaresh Sarwan just before the close of play on day two brought Boyce and Thakor together and, so imperious was their batting, that Kent skipper James Tredwell was forced into using seven different bowlers.

One chance did go begging, however, when Darren Stevens granted Thakor a life on 47, dropping a difficult catch at slip off the bowling of Charlie Shreck.

Eventually, Nash - the seventh of the bowlers used - broke what was a Leicestershire record for the sixth wicket against Kent, before Northeast turned the tables, after being run out backing up on day two, to dismiss Naik before the close.