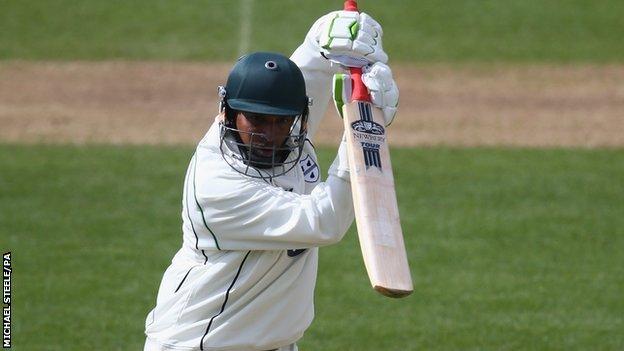 Former Sri Lanka Test batsman Thilan Samaraweera made a key half century at Cardiff to keep Worcestershire in the game against Glamorgan.

After the home side, 235-7 overnight, batted on to make 295, Worcestershire returned to the crease 172 in arrears.

And they were wobbling at 50-2 when Samaraweera came in, on a pair.

But, despite the loss of Moeen Ali (55), he maintained the fightback with 71 not out to help avoid an innings defeat as the visitors closed on 186-5.

Going into the final day with five second innings wickets standing, Worcestershire are still only 14 in front.

But Samaraweera and Aussie wicket-keeper Michael Johnson have so far put on 48 for the sixth wicket.

Earlier, Jim Allenby went on to finish on 78, while Dean Cosker weighed in with 44, Worcestershire paceman Gareth Andrew taking a further wicket to claim figures of 4-79.

"Glamorgan in the ascendancy but a good fightback by Worcestershire at least took the game into the fourth day.

"Thilan Samaraweera needed a long knock and got just that against the medium pacers, although Dean Cosker must be somewhat puzzled at his lack of use.

"Jim Allenby again proving how effective a genuine all-rounder can be in the four-day game and Glamorgan should wrap it up in the morning, but would not want to chase too many on a wicket that still has a bit in it for the bowlers."