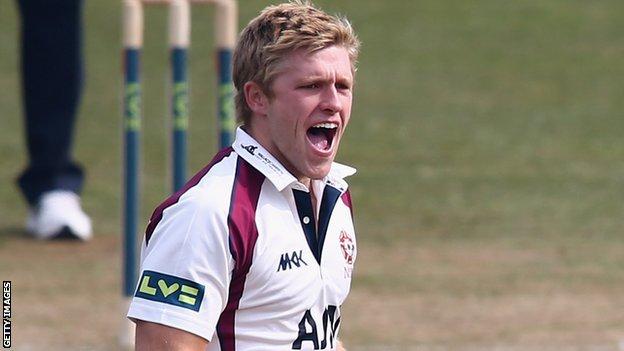 The star with bat and ball

David Willey was on 13 when Northants were reduced to 171-8 on day two. He then smashed 63 more from 44 balls to help his side reach 399 all out, before grabbing a second innings five-for, collecting match figures of 8-110

He edged Willey (5-67) behind and was soon joined back in the pavilion by nightwatchman Maurice Chambers, who had survived 75 minutes for just 3.

As Essex limped towards the 216 required for Northants to bat again, Tymal Mills was last man out with the visitors on 207, still nine runs short.

The visitors put up little resistance, with the 26 in 45 minutes between captain James Foster and England all-rounder Ravi Bopara the longest partnership of the day.

Graham Napier then played an uncharacteristic innings, scoring just 13 in 40 balls until he finally cracked and drove a full Andrew Hall delivery to mid-off.

Mills then survived only three overs before what had long been an inevitable defeat was confirmed.

"The way we've shown discipline with the ball and the way players at the bottom of the order batted with purpose rather than sulking, swung the game our way.

"We just wanted to show people we are competitive.

"The lads have worked very hard over the winter and were busting a gut to get playing.

"It's nice that hard work has been rewarded with good performances."

"They had a couple of partnerships which took it away from us.

"It almost got to the point where it looked like wherever you bowled the ball they were hitting it with ease.

"It's strange - I've never really seen a tail wag like that before.

"It was always going to be a tough ask. I felt we had the skill and the batting to go past their total, but it wasn't to be."

"A magnificent and handsome victory for Northants which left captain Stephen Peters beaming and Essex head coach Paul Grayson refusing to speak to the media.

"The bowlers completed a job which their batting had set up yesterday in a mad afternoon session.

"The talk of the Wantage Road press box is that Northants will be competitive again this year.

"An innings win over an understrength and poor Essex side will give plenty of confidence that 2013 will be considerably better than 2012."