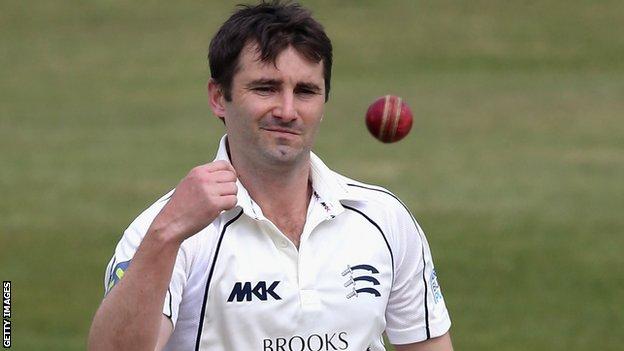 Tim Murtagh took 5-12 and Toby Roland-Jones grabbed a hat-trick as Middlesex bowled out Derbyshire for 60 to set up victory inside three days at Lord's.

Resuming on 180-6, the hosts added just 35 more runs before Jonathan Clare (4-40) took the final wicket to leave a first-innings deficit of 16.

But Derbyshire limped to their lowest-ever total against Middlesex, with Roland-Jones cleaning up the tail.

Joe Denly (44 not out) hit the winning runs to secure a nine-wicket victory.

Toby Roland-Jones' hat-trick was the 30th for Middlesex - the first since Phil Edmonds against Leicestershire at Grace Road in 1981, barely a month after Wayne Daniel had performed the same feat against Lancashire at Southport.

But, once Mark Turner trapped Rayner leg before, Berg quickly ran out of partners to be stranded on 42 not out, his side still 16 in arrears.

Although Derbyshire would have been hoping to set a formidable fourth-innings target, the wicket of Billy Godleman - their first innings top scorer with 55 - in the third over quickly left them behind and they never recovered.

Wickets fell at regular intervals with Steven Finn (2-34) backing up Murtagh's exploits at the other end.

Roland-Jones then came on at the Nursery End to wrap up the tail with a hat-trick.

Tony Palladino was caught behind, then Tim Groenewald feathered the next ball to first slip before Roland-Jones sent Turner's off pole cartwheeling to end the innings and send the players in for an early tea.

With Shivnarine Chanderpaul helpless on 18 not out, the game was the hosts' to lose.

Sam Robson could only follow up his second-day 68 with a four-ball duck, but Chris Rogers (27 not out) and Denly saw Middlesex home to a resounding victory.

"I've had a few opportunities before, and Tim Murtagh had one earlier in the day. It was a bit surreal. Not much went through my head. I just tried to keep it straight and bring in as many dismissals as possible.

"It was a bizarre day. Perhaps not what we expected after conceding a lead.

"We knew our job was to try and restrict them as much as possible but I don't think we quite expected to roll through them for 60.

"It was important to get into them before lunch and Tim bowled the best I've seen him for a long time. 5-12 is stunning."