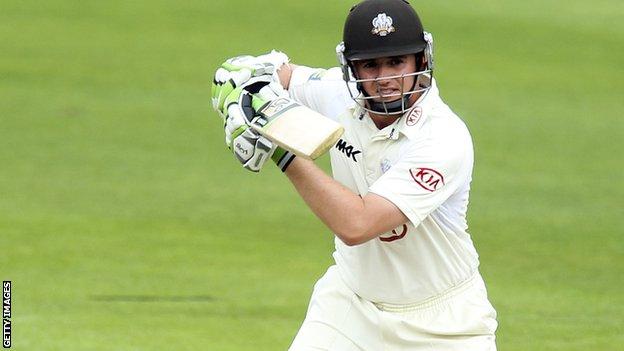 Steven Davies and Rory Burns both hit centuries as Surrey closed in on Somerset's first-innings total of 384.

Resuming on a precarious 98-4, still 286 in arrears, Burns, 43 overnight, eventually went for 115 to end a fifth-wicket partnership of 159 with Davies.

Davies continued to dominate before eventually being dismissed by Jamie Overton (3-75) for an imperious 147.

Two wickets late on the second day had put the visitors in the driving seat, but Davies joined Burns at the crease to devastating affect.

Burns hit 19 fours in his 285-ball century before being caught behind off the bowling of Steve Kirby. But, in a further stand of 71 for the seventh wicket with his old Worcestershire team-mate Gareth Batty (36), Davies remained defiant.

He eventually fell three short of his 150, having struck 22 fours in his 269-ball ton, inviting Surrey captain Graeme Smith to put Somerset in for a tricky final two overs of the day.

Marcus Trescothick and Nick Compton - who remains on a pair - saw those out comfortably enough, leaving a draw the most likely result heading into the final day.

"A very good day for Surrey and in particular Rory Burns and Steven Davies.

"Both scored excellent centuries when it really mattered and frustrated the Somerset bowlers throughout the day.

"Marcus Trescothick and Nick Compton saw Somerset safely through to stumps but an absorbing final day awaits in south London."

"Somerset will be disappointed that they didn't make an early breakthrough, but wickets were always going to be hard to find on a pitch that had barely altered in character since the first day.

"Surrey batted well throughout, but the game meandered somewhat during the last hour, with Davies reluctant to take singles, and it was perhaps a surprise that the home side declared when they did, leaving only two overs to bowl.

"There was certainly no lack of effort or discipline from the Somerset attack and Steve Kirby epitomised this attitude by bowling 33 overs, fully deserving his three wickets."