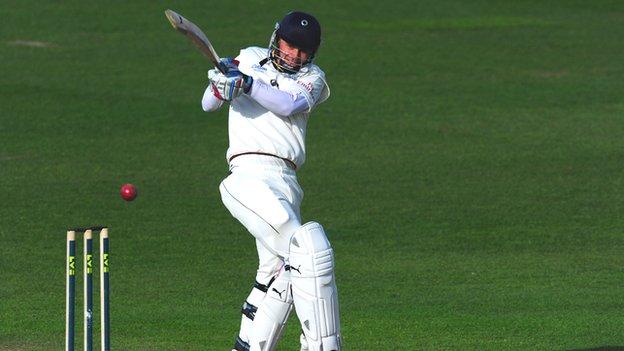 Scott Borthwick and Paul Collingwood led the recovery as Durham avoided the follow-on before being bowled out for 284 against Warwickshire at Edgbaston.

Chris Woakes and Keith Barker each took three wickets for the Bears, who were 6-0 second time around at the close.

Barker, who had earlier got to 45 with the bat in a 92-run stand with Woakes (52 not out), claimed two victims and Chris Wright the other as the Bears briefly had Durham in tatters at 5-3.

But, after losing three more wickets to threaten their lowest Championship score against Warwickshire of 102 at Edgbaston two years ago, in a game they went on to win, Borthwick's maiden Championship century transformed the match.

After Collingwood had gone, the Sunderland-born batsman had Callum Thorp (27) for company in the final session, putting on a further 58, while Ben Stokes (33) and last man Chris Rushworth (18) were the only other Durham batsmen to make double figures.

"Rarely can a 61-run first innings lead have been so hard earned.

"In reducing Durham to 50-6, Warwickshire must have felt defending the title might be easier than they expected. But the resilience of Collingwood and Borthwick brought them back down to earth.

"And they endured a marathon final session. The early tea meant they bowled 50 overs without a break. The floodlights ensured bad light wouldn't offer a respite and they were still playing until 7.15."

"They came together with the side struggling on 50-6 at tea and battled their way through the final session of the day with a fantastic partnership - a record for the 7th wicket by Durham in a match against the Bears.

"It was great to see Scott go on to get his first Championship 100, the day before his birthday. And with Collingwood making 74, avoiding the follow-on gave Durham hope again."