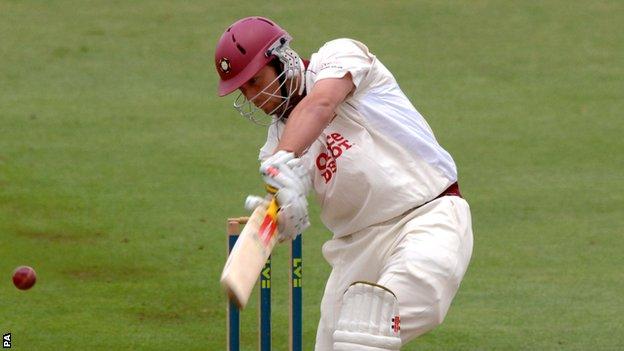 Northants made Essex toil on day two as Steven Crook hit 88 not out and David Willey and Trent Copeland made fifties.

Fresh from his day one heroics, Graham Napier had kept centre stage with three wickets, reducing Northants to 171-8.

But the show was soon stolen as Crook shared century stands with Willey (76) and then Copeland (70) before the latter was dismissed, leaving Northants one run shy of maximum batting points.

Essex were 94-2 at stumps in their second innings, still 116 runs behind.

It had looked as if the sides would be evenly placed after the first innings as Napier had Rob Newton (35) caught behind with the first ball of the day before dismissing James Middlebrook and David Murphy with less than an hour played on day two.

However, the home side's tail-enders had other ideas.

Willey was eventually caught at deep fine-leg before Copeland continued the show to give Northants a huge first innings lead of 216.

Essex had looked like reaching the close with 10 wickets in hand but Westley was spectacularly caught by Northants skipper Stephen Peters at mid-wicket off Willey and Ben Foakes then edged Copeland to wicketkeeper Murphy, ending a miserable day for the visitors.

"For the side who won fewer games than anyone else last season comes the likely honour of securing a first victory of 2013.

"Eight more wickets stand between Northants and a win they richly deserve, after Willey, Crook and Copeland showed more senior batsmen how to bat with authority.

"On this evidence, with Copeland at 11 - he bats at seven for New South Wales - Northants have the deepest batting order in either division.

"The pitch has done something all game after the heavy-roller effect has worn off and the end may not be long coming on the third day."