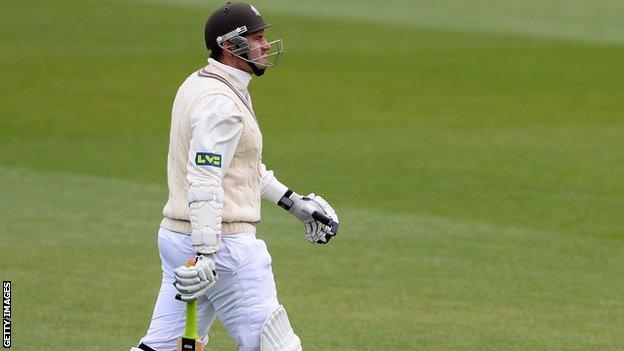 Graeme Smith managed only two in his first innings for Surrey on a rain-affected second day against Somerset.

But South Africa Test captain Smith, making his debut for the county, was then caught by James Hildreth at second slip off the bowling of Peter Trego.

Rory Burns top scored for Surrey with 43 not out as they finished on 98-4.

At the start of the day, Dernbach had Alfonso Thomas caught behind for 32 to complete a five-for, before Dockrell was last man out, to leave Somerset 16 shy of maximum batting points.

Having watched his international team-mate Alviro Petersen hit a wonderful 167 on the opening day, Smith would have been keen to make a similar impact.

But the Surrey skipper lasted just 12 minutes, and three balls, before Hildreth snaffled a low catch to send him on his way.

Arun Harinath, who had to leave the field with a shoulder injury on day one, soon followed before a torrential downpour halted play after lunch.

With the rain subsiding in time for 16 more overs in the evening, Jamie Overton bowled Vikram Solanki (30) with his first ball of the match before Steve Kirby dismissed Zander de Bruyn in a similar fashion to leave the hosts still trailing by 286 at the close.

"All eyes turned to Graeme Smith as the new Surrey captain made his way to the middle to open the innings and got off the mark first ball. But he then got an excellent delivery from Peter Trego on 2 and was very well held by James Hildreth at slip.

"After Arun Harinath followed for 5, we then lost two and a half hours in the afternoon due to hail and rain before play got underway again at 5.45.

"Somerset will be very pleased with getting two late wickets after a lengthy rain delay.

"Solanki and Burns seemed content to bat out time and Solanki was furious when he chopped Jamie Overton onto his stumps, but Steve Kirby's dismissal of de Bruyn was just reward for a typically fiery spell.

"Those two wickets turned things Somerset's way on a pitch that seemed to pose few problems for the batsmen."