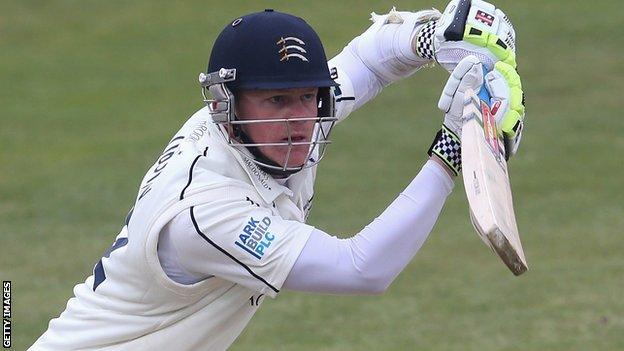 Opener Sam Robson continued his solid start to the season in an otherwise undistinguished Middlesex batting effort against Derbyshire at Lord's.

Having dismissed the visitors for 231 at the start of a rain-interrupted second day, Middlesex lost skipper Chris Rogers early for 16.

Robson kept Derbyshire at bay for over three hours for 68 before falling to Jonathan Clare as they closed on 180-6.

The end of Derbyshire's innings came in the ninth over when Tim Murtagh had Tim Groenewald (25) caught behind to end his 50-run last-wicket stand with Mark Turner (22no), denying England's Steven Finn (4-51) a five-wicket haul.

Robson in the runs

However, the home side found scoring no easier than Derbyshire.

Rogers, hoping to give a further reminder of his abilities to Australia's selectors against his former county, was lbw to Groenewald for 16 shortly after being dropped by a diving Dan Redfern at slip.

When Denly, Dawid Malan and Neil Dexter fell in the space of five overs, last season's Division Two champions were firmly on top, but 23-year-old Robson showed a calm temperament in going to his third consecutive half century of the summer.

After hitting nine fours in his 124-ball innings, he became Clare's second victim when he was caught at first slip by Wes Durston, who then made a further breakthrough when he removed John Simpson.

Derbyshire pressed for more success but Gareth Berg (27) and Ollie Rayner held them off for 18 overs to see their side to stumps, although Rayner had an escape when wicketkeeper Tom Poynton put down a low chance.

"The late partnership between Berg and Rayner ensured the match remained reasonably even after some fine work by the visitors earlier in the day.

"The 50-run stand for Derbyshire's 10th-wicket pushed them to what now appears to be a par score on this track and, when Middlesex were reduced to 140-6, the match appeared to be swinging away from the hosts after a strong opening-day performance.

"Sam Robson's third consecutive half century demonstrated his calibre and prevented a complete collapse at the top of the order.

"The third morning is now a big session to win for either team and it is likely to shape the remainder of the match."