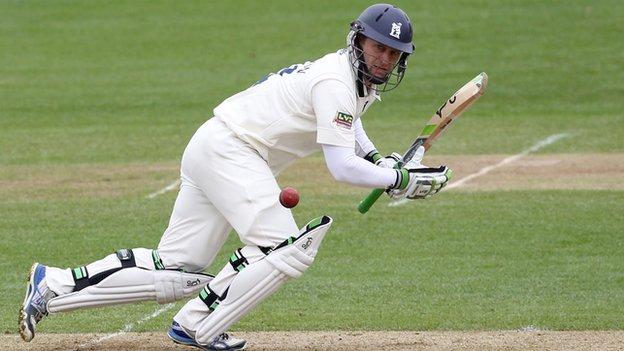 Warwickshire skipper Jim Troughton led from the front with 84 as the county champions reached 299-7 against resurgent Durham at floodlit Edgbaston.

With ground to make up after a rain-ruined draw against Derbyshire last week, Troughton responded well to being put in to bat by Paul Collingwood.

Laurie Evans (44) was his main support act in a fourth-wicket stand of 77.

All-rounder Keith Barker, back after a pre-season hamstring injury, was still there at the close on 39.

Troughton, with 12 fours, carried on from where he left off with two hundreds in the second half of last summer's charge to the Bears' seventh county title.

But Durham hit back after tea, which the Bears took on 194-4, with two wickets in 14 deliveries from Ben Stokes.

The all-rounder removed Tim Ambrose, chopping on after making 31, and then claimed the bigger prize when Troughton's innings came to a disappointing conclusion 16 short of a century with a chip to mid-on.

When Rikki Clarke was caught at the wicket, attempting to cut occasional spinner Will Smith, that was three wickets gone for as many runs.

But, with the floodlights now off, the final session took another twist back in Warwickshire's favour as Barker and Chris Woakes saw off the second new ball, putting on an unbroken 62 in 17 overs.

"Large chunks of the first day's play would have been at risk due to bad light, but the value of having floodlights available for Championship matches at Edgbaston this season is already apparent.

"Instead, we saw an absorbing day's play which fluctuated between the two teams and, by the close, Warwickshire will probably have felt reasonably satisfied.

"Having been put in on an overcast morning their score looks a decent one, although they will be frustrated that several batsmen got in without going on to make a big score.

"While his bowling came on in leaps and bounds last season, Keith Barker's batting seemed to suffer. So it's encouraging to see him in good nick at the start of this season."

"When Durham captain Paul Collingwood chose to field, I'm not sure he realised how difficult it was going to be for his bowlers.

"The wind that battered Edgbaston made it difficult from both ends and it became a day of toil.

"Warwickshire will be pleased to have reached 299-7, having been in a spot of bother at 237-7 when they lost Ambrose, Clarke and Troughton in just four overs."