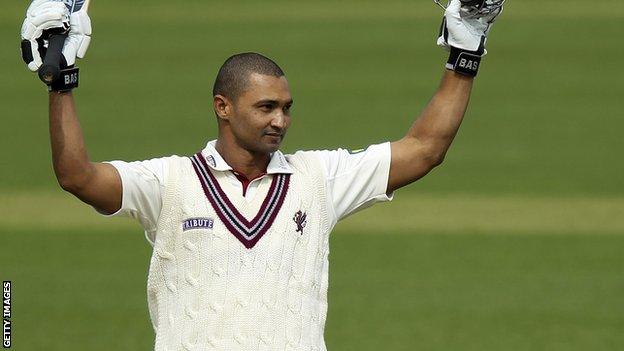 Somerset's Alviro Petersen hit 167 on his debut to frustrate Graeme Smith's Surrey on day one at The Oval.

Captain Smith, also making his county debut, could only watch as his fellow South African batted for much of the day, striking 19 fours and one six.

"Dernbach is a very good bowler. He made life difficult early on. It's a good score on a wicket I'm sure will prove difficult for the side batting last."

After Dernbach had dismissed Jos Buttler and Peter Trego, Zander de Bruyn eventually had Petersen lbw in the 92nd over to leave Somerset 343-8.

In the build-up to the match much of the focus was on South Africa Test captain Smith, leading Surrey for the first time.

But it was his international team-mate Petersen who stole the headlines, finishing 43 short of his best first-class score.

Having won the toss and elected to bat, Somerset skipper Marcus Trescothick would have been hoping to build a solid platform.

But Dernbach bowled Compton in the sixth over for a duck and Trescothick (25) and James Hildreth (34) also followed for modest scores to leave Somerset 117-3.

Craig Kieswetter contributed 43 to a fourth-wicket partnership of 143 with Petersen to swing the momentum back in the visitors' favour, but five wickets, including that of Petersen, fell for 108 runs in the evening session to leave the match nicely poised heading into the second day.

"Honours just about even after two outstanding performances from Jade Dernbach and Alviro Petersen.

"Dernbach constantly asked questions of all the batsmen and changed the complexion of the day after tea when he took two wickets with consecutive deliveries with the new ball. But Petersen held the Somerset innings together and looked comfortable throughout.

"Surrey will be the happier of the two sides and captain Graeme Smith will be pleased with the character his side showed in the final session, picking up five wickets."

"The South African came in after Nick Compton had been dismissed for nought by Jade Dernbach's yorker.

"Dernbach then repeated the delivery next ball and Pietersen just escaped, getting over that early scare to make 167 in his first innings for his new county."