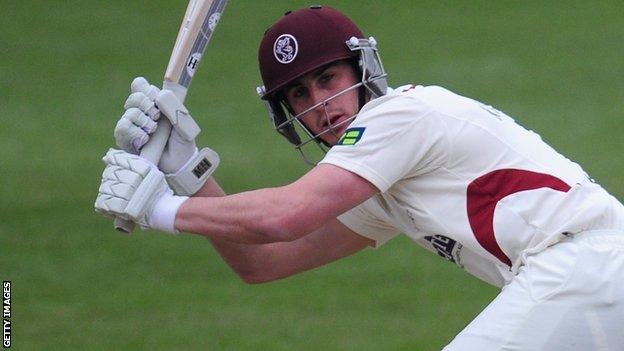 Craig Kieswetter hit 72 but could not prevent Durham completing victory over Somerset by 48 runs in their County Championship opener.

Somerset began the final day at Chester-le-Street on 96-2 in pursuit of 235, with Kieswetter 39 not out.

But once James Hildreth was bowled by Graham Onions (3-65) for 27 with the score 130-3, wickets fell regularly.

Kieswetter was eventually ninth out, one of two more scalps for Ben Stokes (3-34) as Somerset were 186 all out.

The England one-day wicketkeeper and Hildreth made batting look easy early on as they stroked the ball to the boundary.

But it all changed when Hildreth offered no stroke to an Onions delivery which nipped back and bowled him.

Jos Buttler, Alex Barrow, Peter Trego, Alfonso Thomas and Jamie Overton all swiftly followed - three of them pinned leg before - and Somerset's last hope went when Kieswetter was bowled by Stokes trying to work the ball to mid-on.

Lunch was delayed as last pair George Dockrell and Steve Kirby dug in but their resistance was finally ended after nine overs together when Kirby drove Chris Rushworth to mid-off.

"When games are pretty close you have to apply pressure for long periods of time and I thought we did that well. It looked at one point like Somerset were going to do it and the pitch had flattened out.

"But you are only one wicket away, in games like this, from going through a team and that is what happened and you could sense the pressure was building.

"I am delighted with the performance over four days. We only had a few days to actually get out and train on a grass wicket because of the weather. So from that point of view, for us to come out and win our first game, against a very good Somerset side, is very pleasing."

"This was a fantastic win for Durham and continues their great run of form from the back end of last season. It's now six wins in seven in the championship.

"On the final morning this could still have gone either way and as Craig Kieswetter and James Hildreth formed a nice partnership it looked like Somerset might edge in front. But crucially Hildreth's departure with 125 still needed proved crucial.

"Durham captain Paul Collingwood says they are trying their best to keep to a plan and that plan seems to be working. I wonder if the players were fired up after reading so many season previews which had them finishing bottom of the division?"