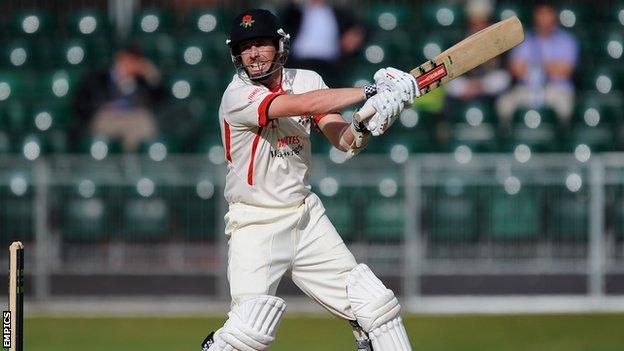 Paul Horton top scored for Lancashire on another rain-truncated day against Worcestershire at Old Trafford.

The Lancashire opener hit 66 before being involved in a run-out mix-up with Karl Brown (34).

"So the 2013 season for Lancashire looks like it will start with a battle for bonus points.

"It is a shame because had the weather played ball, Lancashire were batting their way into a strong position.

"The final day could still yet be interesting with Simon Katich and Ashwell Prince resuming first thing. If Lancashire can get in front quickly, will they pull out and put Worcestershire in?"

"The rain and a slow pitch has consigned this one to a draw, bonus points the only thing left to play for.

"Worcestershire bowled tidily, Richardson his usual frugal self, as well as picking up the late wicket of Brown to a fine slip catch. But Gareth Andrew apart they rarely beat the bat, and it was a little surprising when Procter holed out at mid-on.

"Horton then ran himself out, or was maybe run out, with the athleticism of wicket-keeper Michael Johnson helping Neil Pinner's throw onto the stumps.

"We then had the long-held tradition of covers on and off, mopping up and pitch inspections. Good job cricket is a British game, and county spectators are a patient breed."