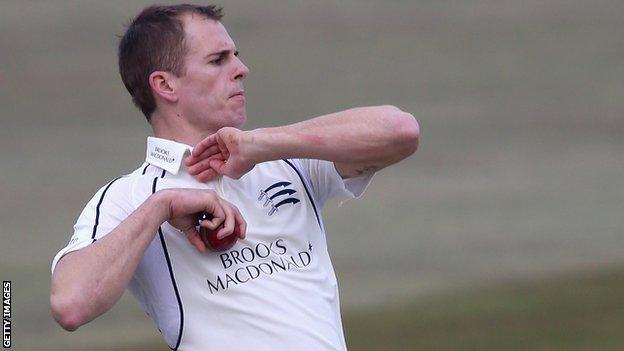 Neil Dexter claimed a career-best 5-27, but Middlesex were held up by a rearguard action from Andre Adams and Luke Fletcher on day three.

Notts were struggling on 60-4 when Dexter tore through the middle order with three wickets in five balls.

After poor weather had delayed the start by 45 minutes, Simpson continued on 77 not out alongside Ollie Rayner, but with the latter soon dismissed by Shahzad for 13, he was left chasing a third first-class century with only the tail for company.

Andy Carter took the wickets of James Harris and Toby Roland-Jones, before Tim Murtagh was the last man out, caught behind off the bowling of Adams, to leave Simpson just three runs shy of a ton.

Ed Cowan and Michael Lumb were both dismissed inside the first four overs of the Notts reply and once opener Alex Hales had fallen for 32 after a stand of 47 with James Taylor, Dexter came to the fore to devastating affect.

His five wickets in less than eight overs left Notts on 93-8 and still trailing by 18, but Adams and Fletcher combined for a ninth-wicket stand of 89 to hold up Middlesex, although the latter was eventually dismissed in what proved to be the last over of the day.

"Nottinghamshire's pre-season billing as second-favourites for the County Championship were made to look ridiculous after a dreadful batting performance, which saw eight wickets fall between lunch and tea.

"Andre Adams and Luke Fletcher showed what could be done in the final session, with a stand of 89, but they say 'it's the hope that kills you' and realistically only rain can save Notts from a final-day defeat."

"Middlesex will still be favourites to wrap up victory on the final day despite the ninth-wicket heroics by Nottinghamshire.

"The afternoon collapse was embarrassing for the hosts as it had little to do with the early season conditions and more poor shot selection on a good track.

"The lead will be an annoyance to Middlesex at this stage, but on a fine wicket, they will know the game is theirs for the taking."