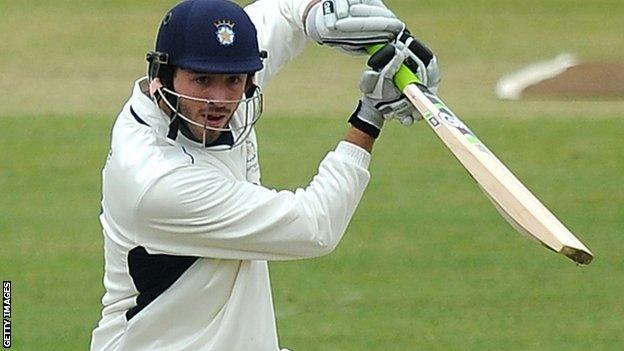 Sean Ervine (69) and Adam Wheater (56 not out) provided excellent support before Hants declared on 454-7.

Skipper Ramnaresh Sarwan was Leicestershire's top scorer in an irresolute batting display, but only managed 25 before he was bowled by all-rounder Sean Ervine, who recently agreed a three-year contract extension with the home side.

With play extended because of delays earlier in the day, it was three quarters of an hour after the scheduled finish time (18:00 BST) when Matthew Hoggard was caught by George Bailey off Tomlinson for 18 to end the innings.

There was still time for another two overs before the close, which openers Michael Thornely and Niall O'Brien managed to negotiate safely.

But the odds are now on Leicestershire starting the summer with a defeat unless they receive assistance from the weather.