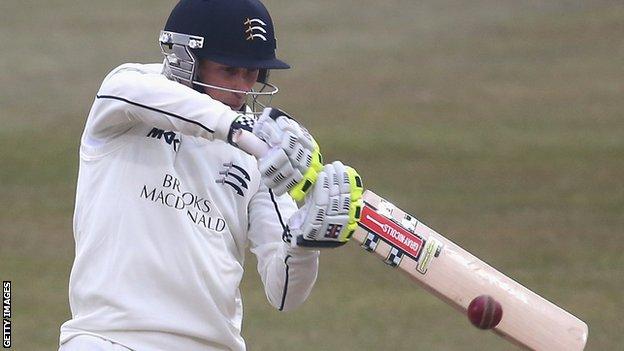 Resuming on 12-0, Sam Robson (76) combined in an opening stand of 106 with Chris Rogers (50), who was trapped leg before by debutant Ajmal Shahzad.

Rogers and Robson had given Middlesex an excellent platform in the morning session before Shahzad eventually broke the partnership in the 27th over.

Fletcher trapped Denly in front in the very next over and, when Malan, Dexter and then Robson were all dismissed in the afternoon session to leave the score on 175-5, it looked like Nottinghamshire could earn a first-innings lead.

But Simpson's 77 off 150 balls steadied the ship and, ably supported by Berg to put on 116 for the sixth wicket, gave the visitors an overnight advantage.

"Despite three wickets for Luke Fletcher and two for Ajmal Shahzad on his Nottinghamshire debut, the day clearly belonged to Middlesex.

"Two century stands, one early, one late, put the visitors into a commanding position at the halfway point of the contest, but under normal circumstances this was a day that would not have happened.

"The floodlights were on from before the start until just before six o'clock, when the umpires decided that the light had deteriorated too badly.

"Credit to the ECB, to Nottinghamshire CCC and the local authorities for allowing the lights to shine brightly upon our summer game."

"Middlesex were outstanding with the bat and will feel confident of adding to what is already a useful first-innings lead. Of the half centurions, Chris Rogers was dominant, Sam Robson defiant, while John Simpson has grown into an impressive innings after a nervy start.

"Nottinghamshire did not bowl badly but have come up against a batting line-up that have fired in early season conditions.

"The hosts will hope to wrap things up in the early conditions of day three, but must be wary of the deficit they'll have to knock off, before setting Middlesex a target to win."