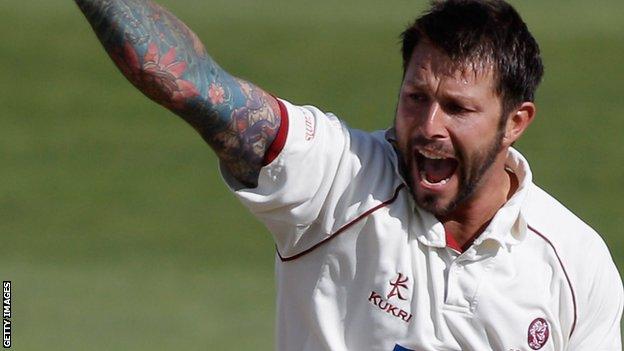 Chris Rushworth had earlier recorded career-best figures of 6-58 as Durham skittled out the visitors for just 132 in less than 38 overs, a lead of 118.

But Trego and Thomas both took three wickets as Somerset fought back in the afternoon to leave Durham on 92-8.

Phil Mustard remained on 23 not out when bad light brought an end to play, with the home side 210 ahead.

Having seen Steve Kirby take the last Durham wicket with the final ball of day one, Somerset were looking to build a solid reply on the second morning, but quickly found themselves on the back foot.

Graeme Onions ripped through the top order, removing Marcus Trescothick, Arul Suppiah and James Hildreth to leave them floundering on 35-3.

And, although England internationals Craig Kieswetter and Jos Buttler combined to steady the ship, Rushworth came to the fore to make light work of Somerset's batting and take each of the next six wickets to fall.

Onions chipped in to take the final wicket of Kirby to finish with 4-41 but, with conditions clearly favouring the seamers, Somerset's response was immediate. And Trego, who had earlier been dismissed for a golden duck, took the first three wickets before Kirby had Dale Benkenstein caught behind to reduce Durham to 20-4.

Thomas soon got in on the act, removing Ben Stokes, Paul Collingwood and Scott Borthwick in quick succession, to give the visitors an outside chance going into day three.

"Durham's graft on day one could prove invaluable come Friday, which will surely be the last day of this one.

"Only 10 wickets fell on the first day as Durham posted 250. but, on day two, a revolving door on the pavilion would have been handy.

"Well done to Chris Rushworth with his career-best 6-58. Bunny Onions weighed in with the other four but Alfonso Thomas and Peter Trego have done their best to make sure this is not a lost cause for Somerset."

"But Durham's lead of 210 already looks more than enough on a difficult, unpredictable wicket on which no batsman from either side has really settled."