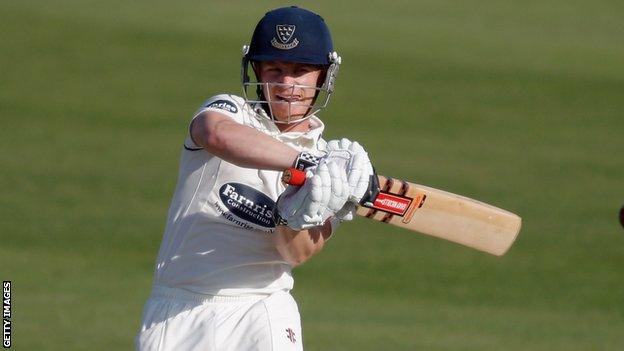 Ben Brown and Ed Joyce shared a stand of 120 as Sussex turned the screw on a rain-shortened second day against Yorkshire at Headingley.

Replying to the home side's first-day score of 96, the visitors totalled 356, Brown making 93 and skipper Joyce 92.

Both batsmen were denied centuries by seamer Jack Brooks, who marked his Yorkshire debut with figures of 4-76.

The home side soon lost Alex Lees at the start of their second innings and were 27-1 at the close, 233 in arrears.

Lees was caught at first slip off Steve Magoffin, but Phil Jaques and Adam Lyth prevented further damage, collecting five boundaries between them before the weather ended proceedings.

Earlier, Sussex may have been slightly disappointed by their lower-order collapse after reaching 318-5 at one stage, with Joyce and Brown well set and batting fluently.

Brooks, who joined Yorkshire from Northants, had figures of 0-56 from his first nine overs, but his confidence returned after he dismissed Joyce and Jordan with successive deliveries and Brown later became his final victim when he was bowled middle stump.

He was denied a five-wicket haul by Ryan Sidebottom, who had last man Monty Panesar lbw for one to finish with 4-72.