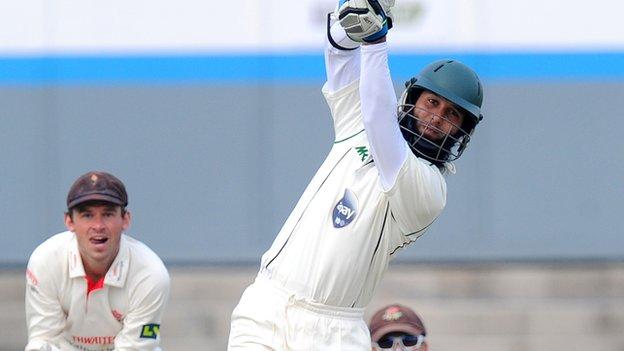 Moeen Ali led the way in the meeting of the two relegated teams, making 78 for Worcestershire against Lancashire on the first day of the new County Championship season at Old Trafford.

The visitors began minus their captain, opener Daryl Mitchell, who was ill and did not bat until later in the day.

But Moeen, aided by 28 from Sri Lankan Thilan Samaraweera on his debut, helped his side recover from 36-2.

Mitchell then made an unbeaten 36 to help his side reach the close on 227-6.

He was well supported by Neil Pinner, whose painstaking 29 took three hours and 17 minutes before being trapped leg before just two overs before the close.

Moeen, dropped at third slip on 42, also survived a run-out scare on 49 during an 188-ball knock which took him past the landmark of 5,000 first-class career runs.

Lancashire's new signing Wayne White took two wickets on his Red Rose debut, in conditions aiding swing if not offering much movement off the pitch.

He was backed by Luke Procter and spinner Simon Kerrigan, who both also weighed in with a brace of scalps apiece.

Apart from having to start the game without Mitchell, who was suffering from a stomach bug, the visitors were also forced into a late team change, bringing in David Lucas when seamer Richard Jones pulled up with a tight hamstring.

"A day that was more interesting than the scoreboard would suggest, as Worcestershire batted a whole day, something they failed to do for much of last season.

"Luke Proctor and Wayne White were the pick of the home attack, but Moeen should have got to a century, going to a fine catch by Ashwell Prince at long on. Is this the season when Moeen comes good? He certainly looked the part.

"Neil Pinner and skipper Daryl Mitchell, who dropped down the order after being hit by a late stomach bug, were stubborn. If Mitchell can help the tail add another 50 or so, it could give Worcestershire a useful total."