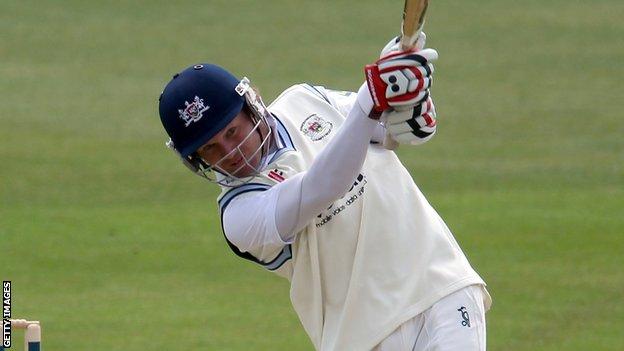 Hamish Marshall hit the first century of the new County Championship season as Gloucestershire put Essex to the sword on day one at Chelmsford.

The Kiwi finished on 120 not out, with Dan Housego alongside him on 124, his first Championship ton for the county.

Essex began brightly, David Masters having both openers caught behind.

Ravi Bopara then trapped Alex Gidman lbw for 12 before an unbroken stand of 229 between Marshall and Housego helped the visitors reached 300-3 at stumps.

The partnership, which also contained a new career-best for 24-year-old Housego, is Gloucestershire's highest-ever for the fourth wicket against Essex, breaking a record that had stood for 106 years.

"Day one belonged to Gloucestershire as Dan Housego, who survived some early nerves against David Masters, hit his highest first-class score and Hamish Marshall barely appeared to break sweat in striking a chanceless century.

"Essex will have hoped for a lot more when they won the toss and reduced the visitors to 71-3.

"Masters was his usual reliable self, taking two wickets, but the other bowlers were guilty of bowling too short at times."

"Century maker Dan Housego was pleased that his father was present at Chelmsford to see him make his career-best score.

"Housego's dad watched as his son beat his previous best of 104 against the Sri Lankan tourists at Uxbridge in 2011."