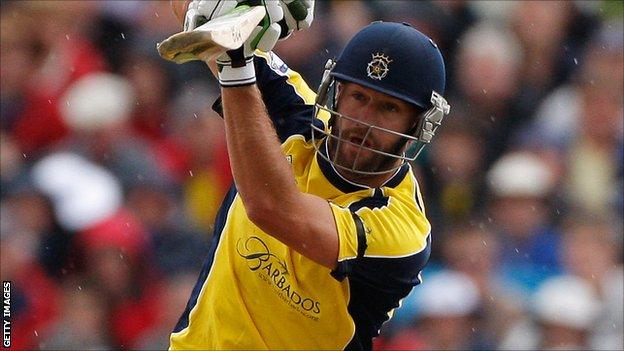 Hampshire all-rounder Sean Ervine has signed a three-year contract extension, tying him to the club until the end of the 2016 season.

Ervine made his county debut in 2005 and has scored almost 10,000 runs and taken 300 wickets in all competitions.

And the 30-year-old former Zimbabwe player was ranked their Most Valuable Player in 2012.

"This club is going places, it's an exciting and special time," Ervine told the Hampshire website.

"For me it was a no-brainer - I love playing at this club. It's been a very successful period for Hampshire cricket over the last few years and I can see it continuing."

Ervine hit 57 off 55 balls at Lord's as Hampshire beat Warwickshire by virtue of losing fewer wickets in a thrilling CB40 final last summer, which enabled them to complete a limited-overs double after winning the FL t20 trophy.

He played five Tests and 42 one-day internationals for Zimbabwe between 2001 and 2004, but last year completed a residency qualification which makes him eligible to play for England.

"'Slug' tells me he's won more medals for Hampshire than any other player and I wouldn't be at all surprised if that was the case," said Hampshire coach Giles White.

"He's been a fantastic servant of the club over many years and we look forward to having him here for many more to come."