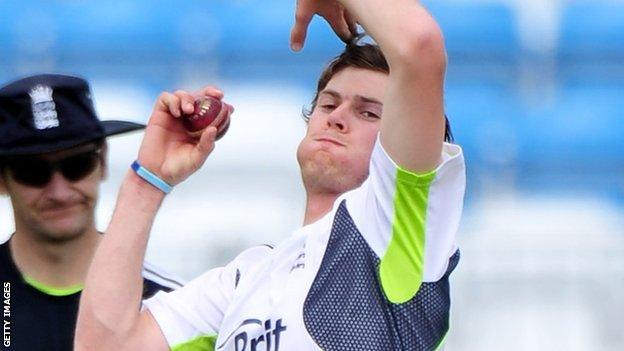 Yorkshire's Gary Ballance and Warwickshire's Chris Wright and Varun Chopra are the other newcomers among the 30 named ahead of the June event.

Test wicketkeeper Matt Prior has not been included in the extended squad, which will be reduced to 15 by 5 May.

"This is a balanced squad with strong options in all areas," said national selector Geoff Miller.

"It reflects players' performances for both the senior England teams and the England Lions and EPP (England Performance Programme) squads over the winter period."

Prior, who has not played a one-day international for England since the World Cup in March 2011, is one of five players included in the 30-man Performance Squad earlier this week but not in the provisional one for the Champions Trophy.

Test specialists Nick Compton and Monty Panesar, Twenty20 opener Michael Lumb and Surrey fast bowler Chris Tremlett, who is approaching full fitness after back and knee injuries, all miss out.

Yorkshire batsman Jonny Bairstow and Somerset pair Craig Kieswetter and Jos Buttler are the three wicketkeepers named in the squad for the tournament, which takes place in England from 6-23 June.

Nottinghamshire batsman James Taylor, who was left out of the Performance Squad, and Warwickshire's 31-year-old all-rounder Rikki Clarke, whose last one-day international appearance for England came back in 2006, are among the 30 for the Champions Trophy.

"With this country hosting the tournament for the first time since 2004, there will be every incentive for England to perform well and we anticipate intense competition for places in our final squad which will be named early next month," Miller continued.