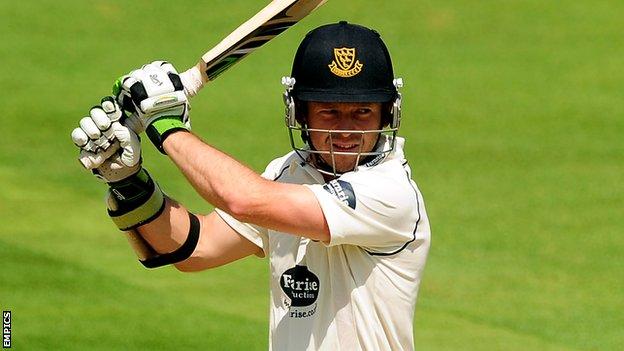 Ed Joyce is relishing the task ahead with the start of his first full season as Sussex captain just days away.

The 34-year-old Ireland batsman took on the role in July last year after Michael Yardy stood aside.

"There is a lot to take on and a lot of responsibility, but I am not going to change the person I am or the way I did things last year."

Yardy took over as captain at Hove in 2009, leading the side to the Twenty20 Cup and the Pro 40 title in that season, but stood down last summer to concentrate on his own game following a well publicised battle against depression, which led to him taking two spells out of the game in 2011.

I'll be missing games through being away with Ireland. It was important that whoever would be vice-captain would be someone I know well and have a good working relationship with

Joyce acknowledged that following Yardy and his predecessor Chris Adams, who spent 11 years leading the side, is a big challenge.

"It's a bit daunting as you've had Chris Adams and Mike Yardy who've done the job over more than a decade between the two of them and it's probably been Sussex's most successful period. There's quite a lot to live up to," he said.

"Robbo [Sussex cricket manager Mark Robinson] has been there through the whole thing and I'm confident we've got a good feeling and good group of people to continue that success.

"I can't wait to get started, get into that first game and get going. I'll try to lead by example and play well myself."

Chris Nash has stepped into the role of vice-captain, a decision Joyce says was important as he will miss part of the season on international duty at the ICC Champions Trophy.

"I'll be missing games through being away with Ireland - three Championship games and a couple of YB40s - so it was important that whoever would be vice-captain and then captain in those games would be someone I know well and have a good working relationship with.

"Nashy is certainly that. I have opened with him and roomed with him for the last three or four years and we get on very well.

"We have the same values and ideas about the way the game should be played. I'd like it to be as seamless as possible when I go and he comes in," said Joyce.

"He could be a captain of the future and I am sure he will do a fine job. He has become one of the best county players around.

"He opens in all formats of the game and I think his game should benefit from the extra responsibility."

One further change for Joyce, who moved to Sussex from Middlesex at the end of 2008, will see him switch from opening the batting with Nash to number four in the order.

"We've changed it around a bit because Murray Goodwin went," he explained. "Luke Wells will open with Chris Nash and Mike Yardy will go at three.

"I have always batted in the middle order, especially when I was at Middlesex and I had success. We thought I should go down and bat in Murray Goodwin's position.

"Yards was very vocal in wanting to bat at number three. That's where he's had most of his success at Sussex, so I was happy to let him do that.

"Luke Wells is more than happy to open as that's what he's always done as a youth player. He's only batted at three for us here.

"We felt it was the right thing to do, especially with Rory Hamilton-Brown and Luke Wright, when he's back, at five and six. It's good to have someone at number four who bats differently to them."

Joyce admitted the onus was on the senior pros in the batting line-up to contribute plenty of runs.

"Myself, Nashy and Yards need to perform. If we don't we'll probably struggle a bit, but that is the way it is," he added.

*Listen to commentary on every county match this summer via the BBC Sport website.