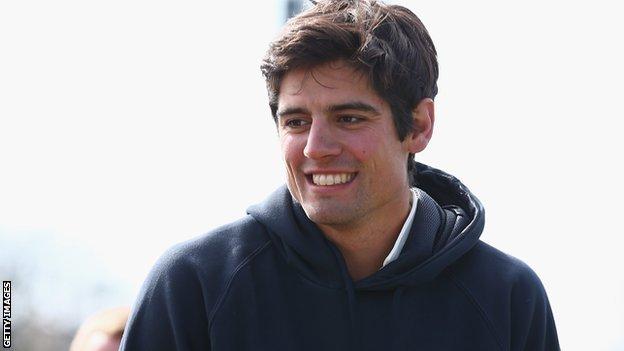 England captain Alastair cook has set his Essex side the target of reclaiming a place in Division One and securing a limited-over trophy.

The 28-year-old opening batsman has featured infrequently for Essex since making his Test debut in 2006.

"I'm very lucky to play for England but one of the negatives is you don't get to play for your county," he told BBC Look East.

"Hopefully we can get back up to the First Division and win a trophy."

Essex have been starved of success in recent years, with their last major trophies coming in the Friends Provident 50-over format and Division Two of the Pro40 in 2008.

But the Chelmsford club are eager to regain their top-flight status after spending the past two seasons in Division Two.

And while Cook will be unavailable for the opening two first-class fixtures, he is hopeful of featuring against Hampshire and Lancashire in the early part of the season.

"It's always great to play for Essex. It's my home county, I've played all my cricket here," he said.

"They've been very good to me and I'm looking forward to playing with the lads again. I'm going to miss the first couple of games but hopefully we can get up and running quickly.

"The lads look in fine spirits and have been working hard. It's always an exciting time at the start of the county season."

Cook has scored 7,307 Test runs since making his international debut in 2006, putting him ninth in the country's all-time batting list.

He is also England's highest century-maker with 23 and the youngest ever player to surpass 7,000 Test runs.

And while his own Test batting average since becoming skipper has been a respectable 57.84, Cook's side

"One of the challenges of being captain is to not let it affect your batting," he said.

"It's a tough job trying to balance the two. That balance so far has worked well.

"Clearly other aspects of the job I'm pretty inexperienced in and hopefully I'll get better at doing them."