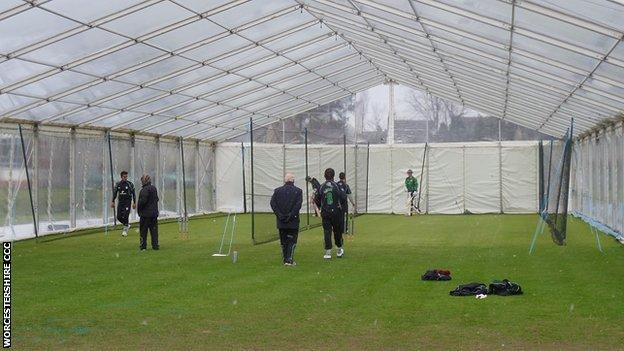 Some cricket teams headed for the Caribbean to do their pre-season training this winter. Some went to the Persian Gulf. County champions Warwickshire did both.

But for the Midlands' other first-class county cricket team, funds are not quite so readily available.

And Worcestershire have done their best warm-up work for the new campaign under canvas - in a specially-constructed marquee in Kidderminster.

Not that anyone is complaining.

"We've had four separate floods this winter and I understand that the last time that happened was 2001.

"We've had 35 days under water this winter. The water was static for quite a while, so that has left quite a bit of mess behind. And we have had people clearing up with jet washes since December, only for us to then get flooded again and go through the whole same process.

"But at least it's been nothing like our terrible flood of 2007. On the back of losing such a lot of cricket last summer, it has exacerbated things a bit, but we're in a better position to manage than we were five or six years ago."

Given that the county's notoriously flood-damaged Worcester headquarters at New Road has spent 35 days under water this winter, leaving them with a clean-up bill as high as £50,000, the players were pleased just to get the chance of any sort of practice.

"Anything is better than none at all," said chief executive David Leatherdale.

"It's easy to say we should all head off to the sun, but who can ever tell what the weather will do in England.

"This time last year it was 20 degrees warmer - and we were having to contend with hard wickets over here."

Having spent two weeks in nets under the Kidderminster marquee before finally getting some time in the middle last week at Chester Road, in a couple of pre-season practice games, Worcestershire captain Daryl Mitchell cannot speak highly enough of the job done by the county's ground staff.

"Tim Packwood and the lads have given us great facilities to play on," Mitchell told BBC Sport. "We have to say a big thank you to them.

"The condition of the outfield at Chester Road is tremendous, given the weather everyone has had. The wickets are true and the nets were great.

"I know a few other counties have used marquees like the one we had, but ours was the best I've seen.

"It was amazing to be able to play, when you think that it was still snowing outside."

The fact that Worcestershire have been able to prepare properly, despite all the handicaps put in their way, has been demonstrated in the form they have shown in the handful of practice games they have managed to get in.

With his 2012 opening partner Phil Hughes' return to form with Worcestershire last season meaning that he will now ply his trade for the Aussies in England this summer, rather than back at New Road, skipper Mitchell will have more responsibility on his shoulders this season.

The batting will also need a weightier contribution from Moeen Ali, as well as hoping that Sri Lankan signing Thilan Samaraweera can roll back the years.

But, with no Marquee signing other than their big tent, any hopes that English county cricket's yoyo of a county might bounce back for a fifth Championship promotion in 10 years depend on the accuracy of their bowling attack - and the astonishing Alan Richardson in particular.

Over the past three seasons at New Road, Richardson - who turns 38 less than a month into the season - has picked up a staggeringly consistent tally of 185 wickets in 44 Championship matches.

The Staffordshire-born former Bear's efforts were enough to help get Worcestershire promoted to Division One in his first season following his arrival from Middlesex, then stay up in the second.

And, although he could not prevent relegation last September, Richardson remains a huge inspiration for coach Steve Rhodes's otherwise largely young, inexperienced side.

Worcestershire on the road

Off the pitch, the county's long-proposed redevelopment of the New Road End, although already delayed by the weather, is at last well underway - an essential requirement if the county are to carry on generating revenue outside cricket.

"We're a month behind, due to things out of the builders' control," Leatherdale told BBC Sport.

"But the main building work should be done by mid-July. And the hotel project is still on course for October 2014."

It is a redevelopment project that was first unwrapped by then Worcestershire chief executive Mark Newton a decade ago, only to be delayed by the almost disastrous financial consequences of the 2007 flood.

But, if the team find their form in the middle this summer, then the distraction of New Road being under reconstruction throughout the 2013 season will be a bearable one.