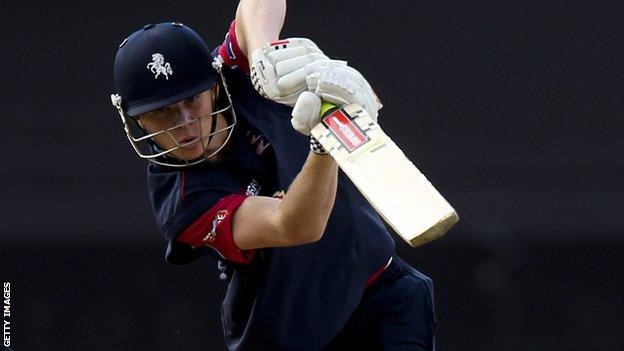 Sam Billings says he is focused on batting success for Kent in one and four-day cricket, not on becoming the club's first-choice wicketkeeper.

The 21-year-old ended last season as the Spitfires leading run-scorer in both the FL t20 and CB40 competitions.

"I'm concentrating on my batting, not on taking the gloves away from Geraint Jones," he told BBC Radio Kent.

"He's a fantastic player. I just need to score runs and if the gloves don't come my way that's absolutely fine."

Billings continued: "I need to have a second string to my bow so I'll keep working on my fielding too - it's just important to keep every aspect of your game up to mark."

The former Loughborough University student has recently returned from five months in Adelaide.

Along with Derbyshire's Dan Redfern and Ross Whiteley, Surrey's Rory Burns and Sussex's Joe Gatting, he was funded by the England and Wales Cricket Board to train at the Darren Lehman Academy.

"It was incredibly intense with anything between two and five sessions a day," Billings said.

"I learnt a lot and having a great bunch of lads there really helped get through the hard work.

"I've had a really productive winter, worked on the aspects of my game that needed it and hopefully I can take that forward this year."

Billings, who is currently recovering from a stress fracture of the foot, enjoyed a breakthrough summer in 2012 which included scoring 143 in the CB40 against Derbyshire - the highest ever one-day innings by a Kent player at Canterbury.

Despite his success in the shorter formats, he did not feature in the side's County Championship campaign.

"Of course I want to be top run-scorer in both one-day formats again but I really want to push for a place in the four-day side," he added.

"Last year I didn't get any opportunity and I probably didn't put myself in a position to earn one.

"As a young player you have to prove yourself and basically I need to score a lot of runs in the second XI and then hope I get a chance."

Kent start their season on 17 April with a County Championship Division Two match at Leicestershire.