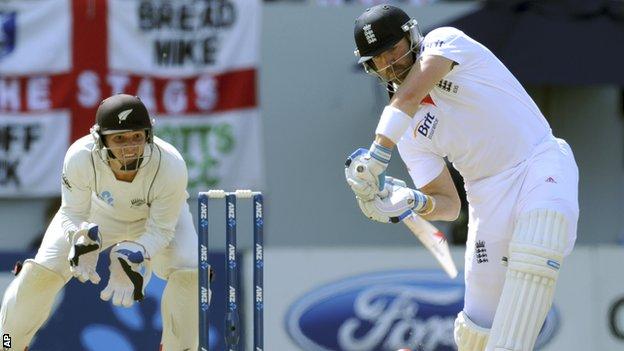 Wicketkeeper Matt Prior says England could still win the series against New Zealand, despite starting day four of the final Test 274 runs behind.

New Zealand finished day three in Auckland on 35-3 to leave England's chances of victory, or even avoiding a 1-0 series defeat, looking remote.

Prior said: "We're going to need a bit of luck and a lot of skill but if we can can get early wickets, who knows?

"We're going to have to bat a lot better, but we can chase these runs."

"New Zealand should have enforced the follow-on because England were wobbling. There is no KP in the middle order, so if New Zealand could have taken two wickets tonight and then a couple in the morning they would have a real chance of bowling England out. Now, if England can come out with intensity tomorrow they have a chance of bowling New Zealand out for under 100 and then it's game on. Anything can happen but this is still a good pitch."

England were bowled out for 204 after losing their last four wickets for four runs, with Trent Boult taking a career-best 6-68 with his left-arm seam.

The tourists were 40 runs shy of the follow-on target but New Zealand decided to bat again.

Prior, who top-scored for his side with 73, said England's late success with the ball was a sign of their resilience.

"Either way, we're behind the eight-ball - quite considerably," he added. "We know that, and we've got to front up to that.

"I think we showed we are doing that, with the 20 overs we've just bowled there. To have them 30-3 was a fantastic effort.

"The thing I love about this team is that we might do it the hard way but we fight."

"We just have to look towards tomorrow morning as the first hour being pretty important. We need to put a couple of good partnerships together and see where that gets us.

"I'm not sure on a figure but we will see how it unfolds."