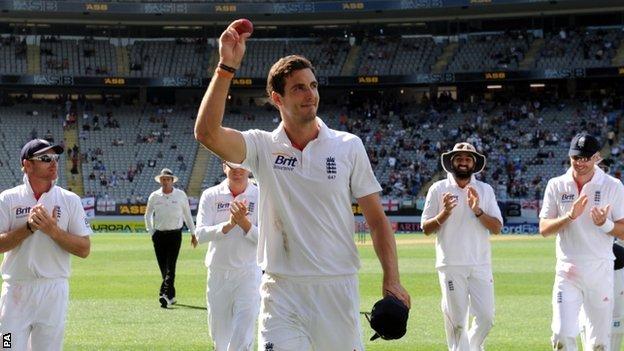 Fast bowler Finn dismissed Peter Fulton for 136 before taking four wickets in 14 balls after tea to equal his Test-best and dismiss the hosts for 443.

"The game has moved forward a great deal, but the fact is England are still looking dodgy. They have got to score quite a few runs before avoiding the follow-on, and they have got two young kids in Joe Root and Jonny Bairstow coming in next. Root has had a couple of failures and Bairstow hasn't had a knock for weeks, so it's a lot of runs. England look vulnerable without Pietersen."

But the tourists lost captain Alastair Cook for four and Jonathan Trott for 27 and ended day two in Auckland on 50-2, 393 runs behind New Zealand.

They would have been facing a bigger deficit but for a superb effort from the dogged Finn in the first hour of the final session.

The 23-year-old ended Tim Southee's entertaining cameo on 44 and then raced through the lower order to complete his fourth Test five-wicket haul in his 20th match.

The Middlesex seamer, who bowled 37.3 overs on a lifeless wicket, was backed up well by wicketkeeper Matt Prior, who took five catches for the fifth time in his Test career.

But England suffered an early blow in their reply when Trent Boult had Cook caught behind off a leg-side delivery in the third over and then an off-balance Trott was trapped lbw by an inswinger from the same bowler.

The Warwickshire batsman was sent on his way after losing a referral which firmly handed the initiative back to the Kiwis.

Nick Compton, with 12 from 72 balls, and Ian Bell (six from 27) dug in to see England through to the close, but their first task on day three will be to ensure their side reaches the follow-on target of 243.

Steven Finn's previous best in a Test match - and his last five-wicket haul before today - came against Australia in November 2010 at the Gabba, when he also took 6-125. It was the fourth occasion the fast bowler has taken five wickets in an innings and he now has 79 wickets from 20 Tests.

The hosts, who were 250-1 overnight, lost an early wicket as James Anderson broke Fulton and Kane Williamson's 181-run partnership by having the latter caught behind for 91.

Fulton, who made his maiden Test hundred on day one, struggled for runs as England starved him of scoring opportunities through his favoured leg-side.

The opener spent 20 balls stuck on his overnight 124 and contributed just five runs out of 24 in a turgid first hour's play.

That sequence was broken when he clipped Anderson through midwicket for three to take his total leg-side runs to 101.

Ross Taylor tried to move the score on but he followed a six and four over midwicket in one Monty Panesar over by tamely chipping a return catch back at the slow left-armer.

Fulton's seven-and-a-half-hour innings was finally ended by Prior's superb diving catch down the leg-side off Finn. The 34-year-old had scored just 12 runs off 69 balls on day two.

However, McCullum became part-time medium-pacer Trott's fourth victim in 41 Tests after Prior took a sharp catch standing up.

Anderson had Dean Brownlie caught cutting a poor delivery low to backward-point to claim his 297th Test wicket and go equal with Derek Underwood in joint fourth in England's list of wicket-takers.

But Southee launched some effective hitting, including successive pulled sixes off Stuart Broad, as the Kiwis went past 400.

However, Finn got the rewards his application deserved and finished the innings on a hat-trick after dismissing number 11 Boult first ball.