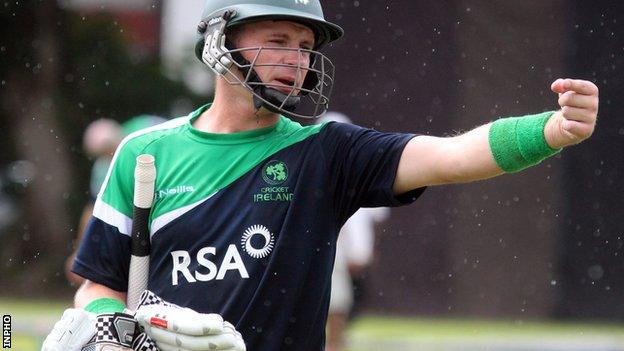 Ireland completed their stint in Sharjah by earning a six-wicket win over the United Arab Emirates in Thursday's Twenty20 game.

Chasing a victory target of 123, Ireland got home with seven balls to spare, largely thanks to 58 from skipper William Porterfield.

Tim Murtagh was the pick of the Ireland bowlers with figures of 3-11 as the UAE reached 122-9 from their 20 overs.

Ireland's win followed their two one-day victories over the same opposition earlier this week, which put Phil Simmons's side on the brink of qualification for the 2015 World Cup.

Ireland have four more World Cup qualifiers and their impressive run-rate means one win from their fixtures against the Netherlands in July, or Scotland two months later, would see them qualify for the main tournament in Australia.

The Irish now have a two-month break from international cricket with their next action on 23 May when Pakistan come to Dublin for the first of two one-day internationals.