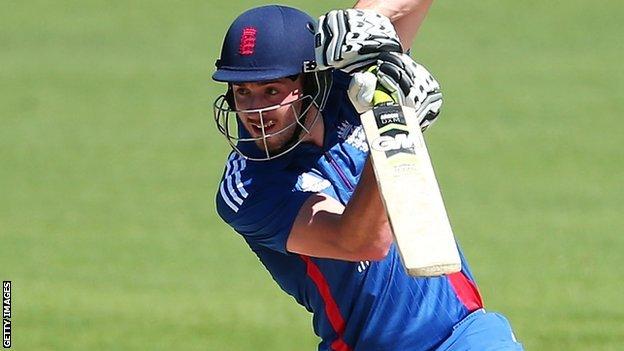 Hampshire batsman James Vince is hoping for an England call-up this year after featuring in the second-string Lions' tour of Australia in January.

The 22-year-old was chosen for the tour alongside county team-mate Danny Briggs, who was later ruled out with a sprained ankle.

Vince believes his experience down under will keep him in the frame for more international cricket in 2013.

"The only way to get up to the next level is by consistently scoring runs in all formats, so that's what I'm looking to do.

"My one-day form was good last year and it was nice to finish off with a hundred in the four-day stuff.

"I think I've shown I can consistently perform in one-day cricket, and now I have to do that in four-day cricket.

"I'll hopefully get some big runs under my belt at the start of the season and push on throughout the year."

The Lions failed to record a single victory on the tour of Australia, losing all three warm-up games before four comfortable wins for Australia A in the one-day series.

But Vince, who hit 98 in Hampshire's pre-season friendly against a Barbados XI on Wednesday, says the squad will learn from their mistakes and are capable of much more.

"We lost fairly comprehensively to a strong side, and I don't think any one of us put in as many good performances as we'd have liked," he said.

"We under-performed as a side but we've gained some good experience from it.

"I batted at six which was a new role for me. I think I prefer batting at the top of the order in one day cricket, but I've learned from being out there so it was beneficial."