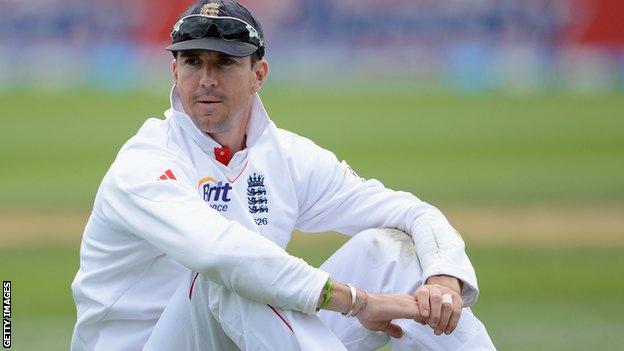 Kevin Pietersen was desperate to remain in New Zealand and play his part in the final Test despite a knee injury, according to captain Alastair Cook.

The England batsman has been ruled out for six to eight weeks with the injury to his right knee.

"He tried to fight through the last two matches playing at 90-95% but those last couple of days in the field he felt it come on more and more."

"Jonny Bairstow is very aggressive and he's done pretty well in his first half a dozen outings for England.

"It's very disappointing KP [Kevin Pietersen] is going to miss the third and final deciding Test against New Zealand but I think we have a decent guy coming in at six."

He added: "It is frustrating for him and for us as a side but this is why you have a squad."

Pietersen, 32, struggled in the first match in New Zealand, making just 12 runs in two innings but in the last match hit 73 from 149 balls.

Cook is hoping the enforced break could come at just the right time for Pietersen, with the Ashes getting under way on Wednesday 10 July.

"Every cloud has a silver lining. Fingers crossed on the scan that he doesn't need an operation but he could get six weeks' break, and with a very busy summer ahead if he does get some rest there is a silver lining to it," added Cook.

Pietersen will be replaced in the side by Jonny Bairstow for the match in Auckland, which gets under way at 21:30 GMT on Thursday.

Bairstow, 23, has scored 196 runs in five Test appearances but has featured just once in the Test side this winter, his last appearance coming against India in Mumbai in November.

He scored just nine runs in the first innings and was not required to bat again as England won by 10 wickets.

"It's great that we're in a very healthy position in the England squad at the moment that when players miss games because of injury other outstanding players can come in," said Cook.

"Young Jonny has a great opportunity now. One he probably didn't think he'd be having a couple of days ago but what a time to hopefully make a mark again."