The moment, when it arrived, was like so many of the other golden ones James Anderson has delivered to England cricket fans over the past decade: a rapid delivery, shaping away, taking the edge and caught in the slips.

Then came the celebration - a group hug involving all 11 England players - and a standing ovation from a full house at Lord's to leave you in no doubt that this moment was in fact something a little out of the ordinary.

Statistics correct at close of play on 17 May

With the dismissal of New Zealand batsman Peter Fulton on the second day of the first Test at Lord's, Anderson joined Ian Botham, Bob Willis and Fred Trueman as the only England bowlers to have taken 300 Test wickets and became the first since Botham in 1984 to reach the mark.

Anderson reached his landmark almost exactly 10 years after his Test debut against Zimbabwe at Lord's at the age of 20. More significantly for a cricketer whose early years in an England shirt were blighted by injuries and erratic form, it was just over five years ago when he was handed an opportunity from which he has never looked back.

After a humiliating defeat by New Zealand in the first Test in Hamilton in March 2008, Peter Moores, England's coach at the time, made the bold decision to drop frontline bowlers Steve Harmison and Matthew Hoggard and recall Anderson, who had been bludgeoned to all parts of Australia in England's ignominious Ashes whitewash the previous winter.

The 25-year-old's response was to run through New Zealand's top five batsmen in Wellington on the way to figures of 5-73 as England charged to a 126-run win. 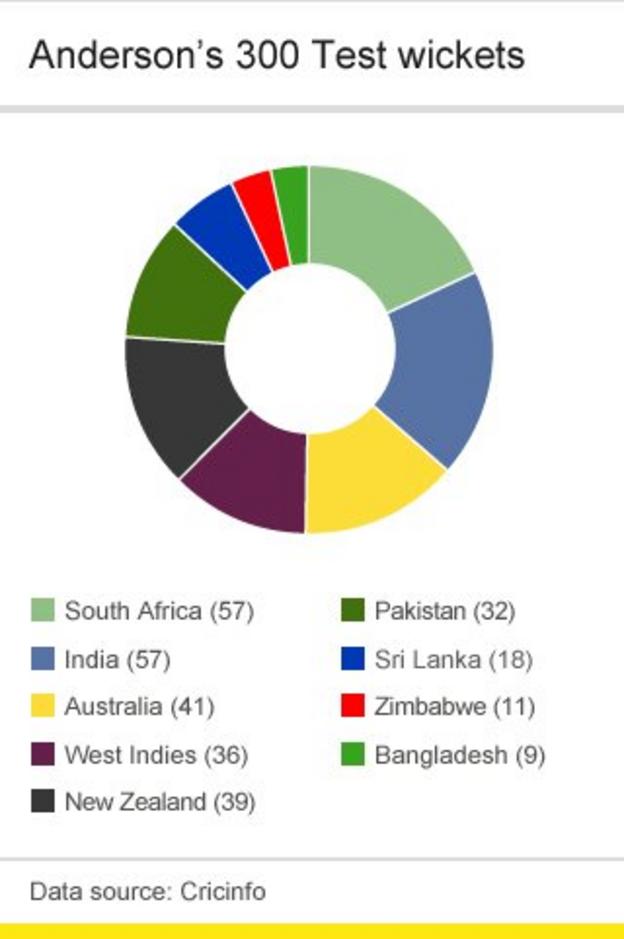 In 20 Tests prior to that breakthrough, Anderson had taken 62 wickets at an underwhelming average of 39.20. Since Wellington, his tally is 238 victims from 61 Tests at a shade under 28.

Reflecting on the turning point five years on, Moores said the key was convincing Anderson he was capable of leading the attack.

"It was important for Jimmy to feel accepted and to be believed in," Moores told BBC Sport. "We were telling him that he had to step up and take responsibility.

"We had lots of discussions about consistency and the understanding that often what dictates a bowler's success is how well they bowl when it is not perfect.

"It was about him staying in the game if it wasn't going right - not getting frustrated but making sure he still did a job for the team.

"When it's tough for you, or you don't feel quite right, you can still deliver something for the team, and that is something that Jimmy has done better and better the longer he has been in that side."

Anderson's biggest skill is his ability to swing both the new and old ball both ways. Lethal at the start of an innings, he is equally capable of running in late in the day and taking a vital wicket.

As consistent now as he was inconsistent in his early years - when injuries and an ill-fated attempt to correct his action disrupted his form and almost wrecked his back - Anderson has taken at least 35 Test wickets in every full calendar year between 2008 and 2012.

"Jimmy plays to his strengths and puts batters under pressure for long periods of time," added Moores. "He doesn't let people off the hook. If you face him, you know you are going to play at a lot of balls.

"When you listen to him talk about it he has a deep understanding of his craft. We have heard a lot of talk about swing, reverse swing, wobble seam - all the different skills a bowler has in his armoury.

"What Jimmy has done is started to understand those properly - when he can apply them, in what conditions and how he can do them consistently enough to be effective in the main arena when it really counts."

Anderson bundled out New Zealand to take Test-best figures of 7-43 at Trent Bridge in June 2008, and ruthlessly exposed the West Indies' and Pakistan's frailties against swing in the summers of 2009 and 2010 before snaring 24 Australians at 26.04 in the 2010-11 Ashes triumph. 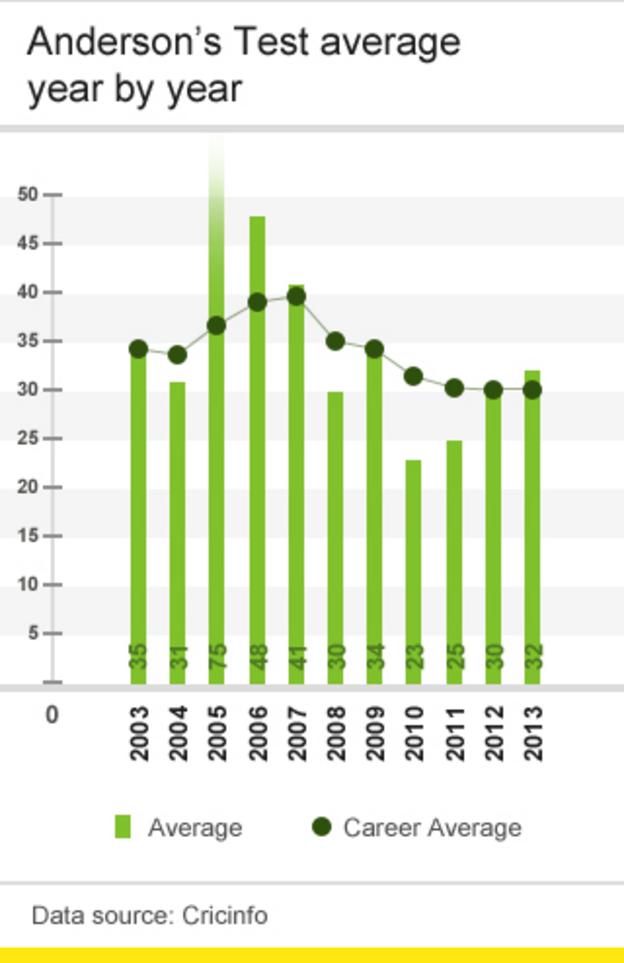 In fact, he exerted himself so much in England's 3-1 triumph down under that he fell asleep in the Sydney dressing room while the rest of the team celebrated.

The following summer, Anderson was once again a leading figure as England thrashed India 4-0 to usurp the tourists at number one in the ICC Test rankings.

And when England travelled to India for the return series in December, Anderson proved a menace even on turning pitches, claiming six wickets in Kolkata to help England recover from 1-0 down to win 2-1.

Twice he dismissed Sachin Tendulkar in front of his adoring fans to overtake Sri Lanka spinner Muttiah Muralitharan as the bowler to have dismissed the great man most often in Tests - nine times.

The list of batsmen most frequently dismissed by Anderson reads like a Who's Who of modern batting greats, with South Africa titans Jacques Kallis and Graeme Smith, Australia captain Michael Clarke and Sri Lanka icon Kumar Sangakkara all in the top 10.

Anderson's former England team-mate Paul Collingwood, who has faced the Lancashire quick in county cricket and fielded in the slips off his bowling, describes him as a batsman's nightmare.

"He's very, very skilful," Collingwood told BBC Sport. "He understands how to get you out and probes away relentlessly at your weaknesses.

"We all know he can swing the ball both ways, but he also has accuracy and pace. His wrist position is subtle so it is hard to pick which way the ball is going to swing.

"I remember the spell he bowled to Mike Hussey and Brad Haddin in Brisbane (in the 2010-11 Ashes). He didn't get them out but they were playing and missing at every ball - it was amazing.

"With some bowlers you are standing there at slip and you don't really feel in the game but I really enjoyed fielding there for Jimmy because you always knew you were going to get a catch."

Collingwood describes Anderson as a "shy and reserved character" who comes alive in the heat of battle.

If he has a fault, it is a tendency to allow his frustrations to spill over - a typically fiery send-off he dished out to New Zealand batsman Ross Taylor in Dunedin was described as "totally unnecessary" by BBC cricket correspondent Jonathan Agnew.

With England scheduled to play 11 Tests in the next nine months, including back-to-back Ashes series, expect Anderson to motor past Trueman and Willis - 307 and 325 wickets respectively - to leave only Botham ahead.

"Jimmy has been the leader of the pack for some time," he said. "He loves that position, he's very proud of that position and I think he will probably go on and get 500 Test wickets if he stays fit."