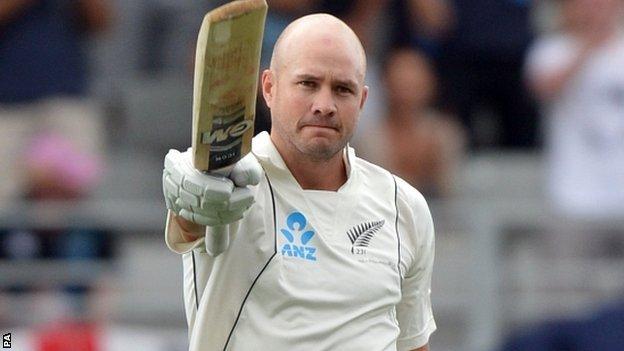 Peter Fulton made a maiden Test century as New Zealand dominated England after being asked to bat in the final Test.

England opted to bowl on an Eden Park pitch that looked like it might offer some pace and bounce early on.

To bowl or not to bowl?

Former England opener Geoffrey Boycott: "I don't know why you would want to field first, possibly for two days, before you have a bat. There was nothing in the pitch, there has been no reverse swing and no spin for Monty."

Former England captain Michael Vaughan: "I would have done the same as Alastair Cook at the toss earlier, but the fact is I'd have been wrong as well."

Former New Zealand captain Jeremy Coney: "I'm loathe to blame Alastair Cook for putting New Zealand into bat first. All the signs were there that the pitch would assist the fast bowlers. However, it hasn't turned out that way."

With the third Test set up as a series decider following rain-affected draws on flat pitches in Dunedin and Wellington, England captain Alastair Cook hoped the wicket would provide his bowlers with a better chance of taking 20 wickets.

Opposing captain Brendon McCullum admitted he would also have bowled first but the pitch, dropped into the square for this match, proved to be perfect for batting despite there being tinges of green on the surface.

England's pace attack was blunted, while Monty Panesar was unable to extract any noticeable turn with his left-arm spin.

Fulton, who made his Test debut in 2006 and had a previous highest score of 75, was recalled for this series after an absence of 39 months and with an average in the low 20s.

He added 79 for the opening wicket with Rutherford and then 171 with Williamson to help the hosts punish the world's second-ranked side.

"England looked like a side feeling sorry for themselves in the last hour. They just needed a breakthrough. Full credit to New Zealand for how they have played throughout the whole series. They have surprised me. New Zealand in the three matches have looked equal to England. To bat through the whole day and only lose one wicket deserves huge credit. Fulton deserved his first Test century and Williamson looks a class act."

Nicknamed 'Two-Metre Peter' because of his height, Fulton became only the second New Zealander, after Zin Harris in South Africa in 1962, to score a maiden century after turning 34.

Fulton had a life on 16 when a James Anderson delivery flew off the edge of his bat and narrowly avoided the slip fielders before running away to the boundary.

The 6ft 6in opener made another mistake going after a Stuart Broad delivery a few overs later but the short boundaries at Eden Park, which is normally used for rugby, meant the ball flew over the rope for six.

Rutherford smashed two sixes off Panesar, but came undone on 37 while trying to do the same to Finn and was caught by Cook at first slip in the penultimate over before lunch.

Fulton grew in confidence after the interval and surpassed his previous Test-best with a leg-side sequence of 4-4-6 in one Panesar over.

"Peter Fulton's first Test century came in 203 balls, with 14 fours and three sixes. He made his debut in 2006 and it's a lucky 13 - it's his 13th Test and his 13th first-class century. Also, it's only the second time in 28 series where two of New Zealand's opening batsmen have made centuries."

With Williamson batting with complete control and England failing to create a noteworthy chance, the duo moved the score along to 173-1 at tea.

After being on 99 for nine balls, Fulton brought up his three figures early in the last session, having faced 203 deliveries, and the opener continued to frustrate England's labouring pace attack after the new ball was taken in the final hour.

England's body language looked poor as they grew increasingly deflated and unable to change the course of the match.

Williamson, 22, made his second successive half century, and was closing in on a flawless fourth Test ton at the close of play.