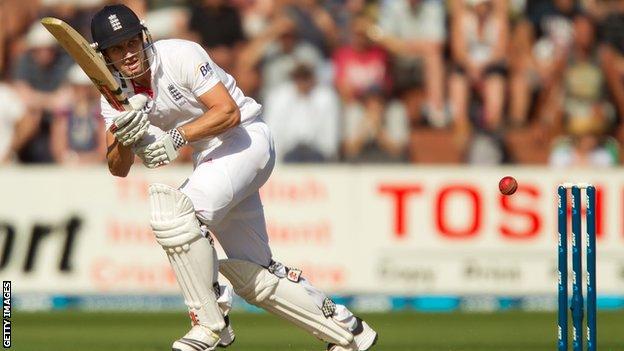 Batsman Nick Compton does not feel his England place is secure despite scoring centuries in his last two Tests.

Compton's position was under threat following his failure to make a big score in his debut series in India.

But he posted his maiden hundred in the first Test in New Zealand and followed that up with a ton in England's next game against the Kiwis.

"I've done well, but do I feel established? No, I still feel a long way off," said Compton.

"I think it's great to be a part of this team and contributing but it's still early days. It's my second series."

Compton scored 117 in his fifth international as England drew with New Zealand in Dunedin in the first Test and followed that up by scoring 100 in the drawn second match in Wellington.

Now, the Somerset batsman is concentrating on the third and final Test in Auckland on Friday, 22 March, rather than looking ahead to playing in the summer's Ashes series.

England have drawn the opening two matches of the series in New Zealand.

He said: "I've dreamed about the Ashes since I was a little boy.

"It's something that now feels a bit more tangible but it's not something I'm thinking about at the moment.

"My mind is on this New Zealand series. To look too far forward is not wise.

"Maybe when you drift off to sleep you think about the Ashes, any aspiring cricketer would do, but right now I've got to be honest - I'm looking at the next game"