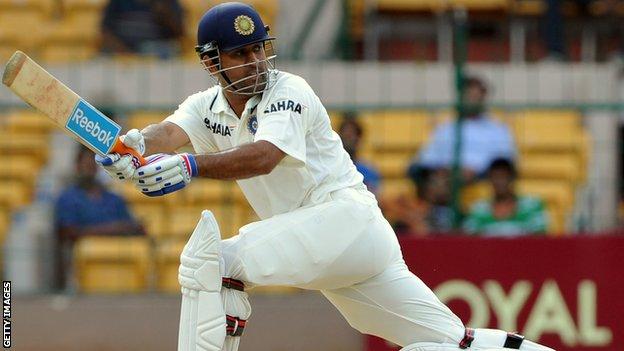 India beat Australia by six wickets in the third Test in Mohali to complete a series victory over the tourists.

India, who now lead the four-match series 3-0, had been set 133 to win after bowling out Australia for 223 in their second innings.

Virat Kohli top-scored with 34 before Dhoni (18 not out) completed the win.

India's victory had been built upon a fantastic innings by man-of-the-match Shikhar Dhawan, who scored the fastest century on debut in Test cricket as India compiled 499 all out in their first innings in reply to Australia's 408 all out.

"It's a dream come true," said Dhawan. "When I entered the game, I was nervous for three or four balls.

"But once I got into my rhythm I just played my natural game.

"I wanted to stay at the crease as long as possible, I didn't want to throw my wicket away. I will cherish this for the rest of my life."

Bowler Mitchell Starc had top-scored in Australia's first innings with a stylish 99 at number nine, with Steve Smith (92) also contributing.

But without the four players, including vice-captain Shane Watson, that coach Mickey Arthur dropped for the game as a disciplinary measure, the Australians were bowled out for 223 in their second innings.

That left India needing to chase down 133 in just 34 overs, which they achieved with Dhoni and Ravi Jadeja at the crease.

The fourth Test starts in Delhi on Friday.