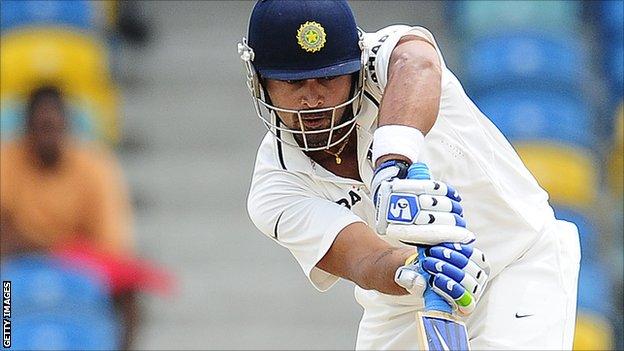 Australia trail by 16 runs after they dismissed India for 499 on the fourth day of the third Test in Mohali.

It meant India held a 91-run lead and, after Bhuvneshwar Kumar took 3-25, they were firmly in control of the match.

But Phil Hughes' unbeaten 53 gave the tourists hope of rescuing the Test.

However, at 2-0 down, Australia must find a way to win the match to keep the four-match series alive.

After the pyrotechnics of Saturday, when he scored the quickest century ever by a Test debutant, Dhawan's departure was surprisingly low-key as he added only one to his overnight 186.

Vijay, though, was unruffled and fours in successive overs from Siddle and Nathan Lyon took him to three figures.

India's opener was on 142 at the interval and boundaries off Xavier Doherty and Steve Smith took him past 150 for the second successive innings, following his 167 in the second Test at Hyderabad.

But both he and Mahendra Dhoni were trapped lbw by Mitchell Starc in-swingers - and Ravindra Jadeja endured an edgy start against the left-armer before falling to Siddle for eight, caught by keeper Brad Haddin.

Ravichandran Ashwin made just four before being dismissed in similar fashion but Virat Kohli seemed content to bat on with little urgency despite the advanced stage of the game, the first day of which was lost to rain.

He finally hit three boundaries in the final nine balls before to reach a 108-ball half-century and put on 61 with Bhuvneshwar Kumar, who made 18 before gloving Siddle through to Haddin.

Ishant Sharma edged a fourth catch to Haddin before Siddle beat Pragyan Ojha for pace to take his fifth wicket, with Kohli stranded on 67.

In reply, David Warner's only runs came when an edge squirted low through Ashwin at slip for two off the second ball of the innings from Kumar, before he nicked the third to Dhoni.

Hughes grew in confidence with authoritative boundaries off Sharma and Ashwin but Ed Cowan fell for eight, the victim of a marginal lbw call as Kumar took his second wicket.

His third came when he knocked over Smith's off-stump with a fine out-swinger and he ended the day with 3-25.

Hughes completed a 50-ball half-century, laden with boundaries but not always convincing, when he edged Ashwin for a ninth four to go with a six off Jadeja and he and Lyon remained together at stumps.