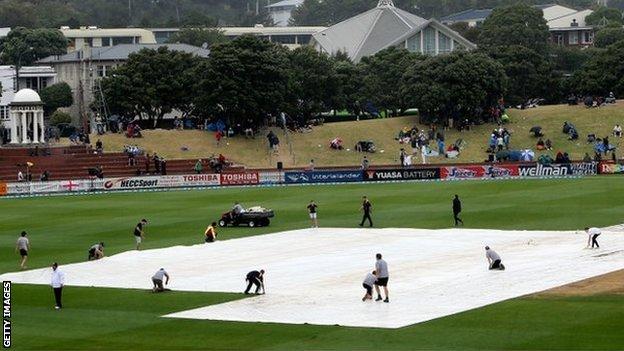 England were frustrated by a combination of New Zealand's batsmen and rain on the fourth day of the second Test in Wellington.

Peter Fulton fell early on for 45, but Kane Williamson and Ross Taylor made 55 and 41 not out respectively.

With more rain forecast on day five, a draw appears the most likely result.

Should the predicted bad weather hold off, England will still harbour hopes of forcing victory on a day which will begin half an hour earlier than scheduled at 21:00 GMT on Sunday.

But they must first break a third-wicket partnership currently worth 81, and defy a pitch that continues to favour bat over ball.

Williamson and Taylor batted sensibly to overcome the loss of Fulton, who was caught by Alastair Cook at first slip as he attempted to force James Anderson off the back foot in the fourth over of the day.

It was England's only tangible reward in a morning session which saw Williamson go to a determined 155-ball half-century containing seven fours.

Although Monty Panesar, finding considerably more turn than the previous day, beat the outside edge of both Williamson and Taylor, he also offered opportunities to score off the back foot.

New Zealand, seeking to preserve the 0-0 series scoreline heading into the final Test at Auckland, would have been the happier of the sides when rain washed out the afternoon session.

Following an aborted restart, only six overs were bowled after tea, the most notable aspect of which was a Williamson hook off Stuart Broad that landed just short of Kevin Pietersen at fine-leg.