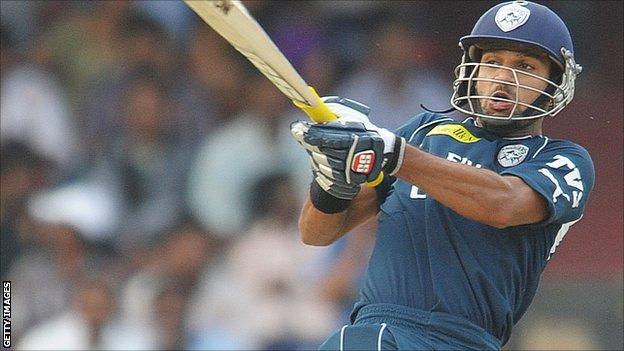 The left-hander's unbeaten 185 more than filled the void left by Virender Sehwag as India reached 283-0 at stumps on day three.

Dhawan was ably supported throughout by Murali Vijay, who made 83 not out.

The tourists were earlier bowled out for 408, with number nine batsman Mitchell Starc falling for 99.

But the headlines belonged to 27-year-old debutant Dhawan, who beat the 93-ball record set by West Indies' Dwayne Smith against South Africa in 2004.

Dhawan's 185 was also the highest score by an India debutant, beating Gundappa Viswanath's 137 in 1969.

His performance overshadowed the morning heroics of Starc and Steve Smith after Australia resumed on 273-7.

The pair extended their eighth-wicket stand to 97 before Smith - 58 not out overnight - was stumped off Pragyan Ojha for 92.

The dismissal merely encouraged Starc to attack more, and he claimed boundaries almost at will.

However, he twice played and missed at Ishant Sharma before being caught behind.

Dhawan made a blistering start in the India reply and took an early liking to the medium pace of Moises Henriques as he raced past 50 at better than a run a ball.

The more restrained Vijay joined in the fun with two sixes in an expensive Nathan Lyon over and, when Starc's return was greeted in typical style by Dhawan, the century partnership was on the board inside 22 overs.

Dhawan reached his ton with a five when he dived to complete a risky single and the throw at the stumps flashed past for four overthrows.

His century, which contained 21 fours, was the fourth fastest by an India batsman, a list headed by 74-ball tons from Kapil Dev and Mohammad Azharuddin.

Vijay went to a 103-ball half-century after tea, before Dhawan hit his first six - and almost his first aerial shot - when he lofted Lyon into the sightscreen despite being deceived in the flight.

The 200 partnership came up with three Dhawan boundaries in one Starc over and Lyon suffered the same fate as Dhawan reached 150 from 131 balls.

Smith could not stem the flow of runs, twice disappearing for back-to-back boundaries, and the punishment continued for all Australia's bowlers until the close of play.