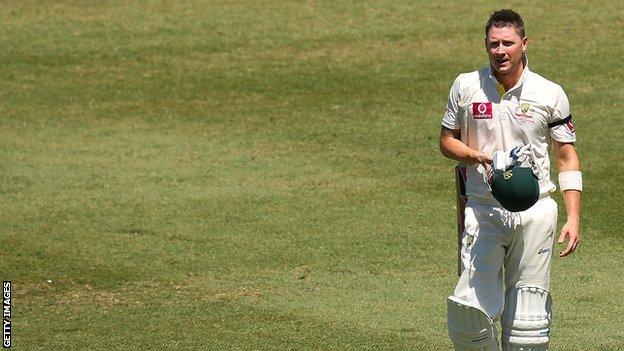 Australia captain Michael Clarke was dismissed for a first-ball duck as his side finished day two of the third Test against India on 273-7.

Ed Cowan (86) and David Warner (71) put on 139 for the first wicket before the tourists lost Warner, Clarke and Phil Hughes for 12 runs before tea.

Steve Smith was unbeaten at stumps on 58, with Mitchell Starc 20 not out.

Day one in Mohali was washed out, while India have a 2-0 lead in the four-match series.

"The absence of the four players may well galvanise the Aussies and make them an even tighter unit by the time they travel to England this summer. It must never be forgotten that no individual is bigger than the team and for every action taken there is a consequence."

India won by eight wickets in Chennai before winning by an innings and 135 runs in Hyderabad.

Australia dropped four players for the third Test for failing to complete a team presentation.

Wicketkeeper Brad Haddin replaced the injured Matthew Wade while Nathan Lyon, Smith and Starc came in for Glenn Maxwell, Watson and Pattinson, with Clarke moving up the order from five to three.

After winning the toss and electing to bat, Cowan and Warner registered Australia's highest opening partnership in India.

However, Warner and Clarke fell from successive balls, the visiting skipper stumped by Mahendra Dhoni after coming down the track to Ravindra Jadeja.

Hughes took 20 deliveries to get off the mark and his painful innings of two came to an end when he gloved one behind to Dhoni off Pragyan Ojha.

Hughes has now scored 27 runs in five innings in India, including two ducks.

Cowan's gutsy innings came to an end when he was caught by Virat Kohli off the bowling of Ravichandran Ashwin before Smith took the attack to India.

Haddin (21) and Moises Henriques (0) fell in quick succession but Smith, who hit seven fours and a six, held the innings together.