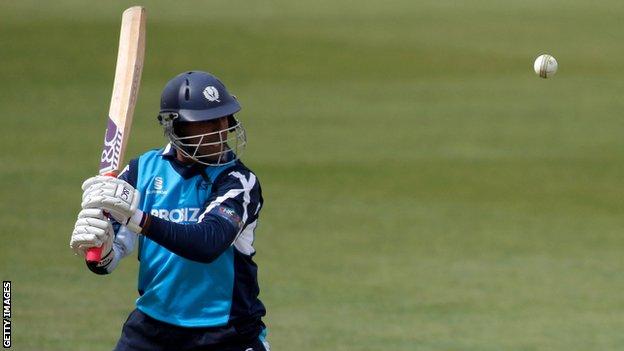 Scotland have suffered a crushing defeat in their ICC Intercontinental Cup match with Afghanistan.

The Scots, who closed day two with a wicket remaining, lost by an innings and five runs in Abu Dhabi.

The Afghans completed a first innings of 275, with Rahmat Shah making a patient 67 not out, to lead by 150.

Despite a valiant 57 from opener Kyle Coetzer, Scotland could only stutter to 144 for nine in reply, with skipper Gordon Drummond on 16 not out.

However, Drummond only has support from tailender Safyaan Sharif, who is unbeaten on 10.

Put into bat on day one, Scotland could only manage a hugely disappointing 125 all out, with Robert Taylor top scoring on an unbeaten 48.

Izatullah Dawlatzai did most of the damage, taking six wickets for the loss of just 38 runs from a 12-over spell.

Afghanistan built on their overnight 150 for four, thanks to the steady play of Shah, who took 196 balls to reach his total of 67.

Asghar Stanikzai and Mohammad Shahzad each made 41 at a much more rapid rate of knots.

The Afghans' first innings came to a close with the wicket of Dawlatzai, who thumped three fours from the seven balls he faced.

Scotland needed a strong start in reply but lost Josh Davey in the third over of their second innings, while Matt Machan, Richie Berrington, Majid Haq and Calum MacLeod all fell in quick succession to leave the visitors tottering on 44 for five after 15 overs.

David Murphy steadied the ship for a while with his Northants team-mate Coetzer, forging a partnership of 61.

But when Murphy fell for 23, Dawlatzai soon compounded the Scottish misery by taking his 10th and 11th wickets of the match.

And the Scots failed to give the Afghans a lead to chase, with Zadran claiming Drummond's wicket and seal a comprehensive victory.

Scotland have already lost two Twenty20 matches and two one-day internationals to the big-hitting Afghans on this United Arab Emirates tour, with their opponents destined to leapfrog them into second place in the Intercontinental Cup table.