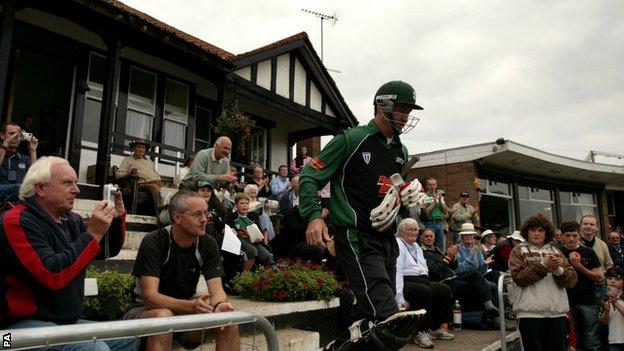 Flood damage at Worcestershire's New Road has forced the county to move pre-season training to Kidderminster.

A 40m-high marquee has been installed to cover the Chester Road square to enable training on outdoor wickets.

"You've basically got an indoor facility that is outside with grass nets," coach Steve Rhodes told BBC Hereford and Worcester.

"That's wonderful really as you're getting used to the conditions that you will be playing on in a match."

Four other first-class counties are understood to have adopted similar plans to prepare for the 2013 county cricket season.

Rhodes first witnessed the idea when Worcestershire travelled down to Chelmsford this time last year for a pre-season friendly.

I'm confident it'll be ready for the season. It's already 10 times better and there's no home game until May

And, with New Road in its customarily rain-affected state for this time of year, they have activated their usual Plan B button by switching to Chester Road, to play in the marquee under a clear polythene roof, with nets erected inside.

"We played in that marquee when we went down for the game at Chelmsford and I thought it was a very good idea," added Rhodes.

"It's nice to go away on pre-season tours in different climates but actually getting your body ready for bowling when it's cold and wet on English wickets may well be the best way of preparing,"

Worcestershire's home is under reconstruction as the county press on with their plans to build a hotel at the New Road End of the famous old ground, which has involved the demolition of the offices used by their administration staff.

But the main concern is the effect of this winter's persistent flooding, the ground having been under water four times in the past three months.

"The New Road square was re-seeded 10 days ago and the plan is to return in early April," added Worcestershire chief executive David Leatherdale.

"I'm confident it'll be ready for the season. It's already 10 times better and there's no home game until May."