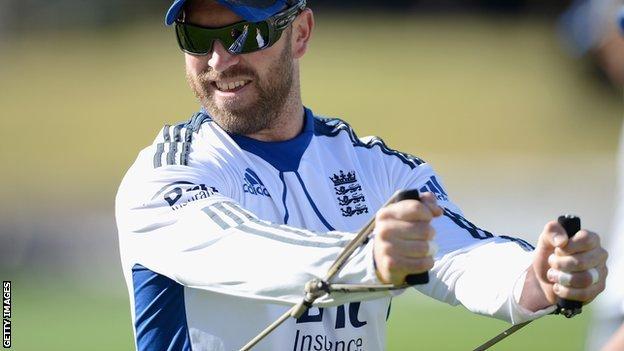 Wicketkeeper Matt Prior says England are aware of Australia's disciplinary problems but are focused only on their next Test against New Zealand.

Australia, who play England in back-to-back Ashes series later this year, have suspended four players for their third Test in India.

"It's not passed us by," Prior told BBC Sport ahead of the second Test.

"But it is not something that we are interested in at all. We've got a huge Test match coming up."

"The absence of the four players may well galvanise the Aussies and make them an even tighter unit by the time they travel to England this summer. It must never be forgotten that no individual is bigger than the team and for every action taken there is a consequence."

The second Test starts at 21:30 GMT in Wellington on Wednesday and comes after England fought back to draw the first Test in Dunedin.

The Kiwis spent 170 overs in the field during England's second innings in Dunedin, when England scored 421-6 as they ground out a draw after bouncing back from scoring just 167 in their first innings.

"Our main focus is on starting a lot better than in the last Test," added Prior. "I'm sure the Kiwi bowlers will be feeling it.

"Any seamer bowling 40 overs is a mammoth effort. I'd rather have been batting for 170 overs than fielding, let's put it that way."

Meanwhile, Australia on Monday dropped quartet Shane Watson, James Pattinson, Mitchell Johnson and Usman Khawaja after they failed to make a presentation to the team's management on how to improve following defeats in the opening two Tests against India.

All-rounder Watson, 31, left the tour after the decision in order to return home to be with his pregnant wife and says he is considering his Test future.

The punishment of the four players has been criticised by Australia's former captain Allan Border and ex-batsman Mark Waugh, although the team's current skipper Michael Clarke defended the decision.

"If you play for Australia there is a lot that comes with that and standards, discipline, culture," said Clarke. "That is all a big part of what we are talking about here.

"It's not the fact that they didn't do their homework, to represent this team we have high standards, we need to have those to get the best out of every person in this team.

"It's not just about one incident, there's been a number of things where we haven't been giving ourselves every single opportunity to be the best individual players we can be."

Australia are third in the Test rankings and paceman Pattinson, 22, believes the punishment could be what was needed to send out a message to the team's players.

"I believe that this last resort of guys missing a Test match is not just because of homework not being put in. I think it is maybe more of an underlying culture that has been happening and at some stage they have to break that culture and get the side back playing together and in the right frame of mind."

"I think this is the kick in the bum to make you really realise what we've got and what we really want, and that is to get to number one," said Pattinson.

"It sends a message to everyone here that we're playing Test cricket and you have to give everything for the team.

"No individual comes higher than the team and I think this is a perfect example.

"So leading into this massive summer over in England and then into the Ashes back home, this is just that stepping stone which could lead to something special in the future."

Australia play the first of five Tests against England on 10 July at Trent Bridge, before the return Ashes series starts in Brisbane in November.