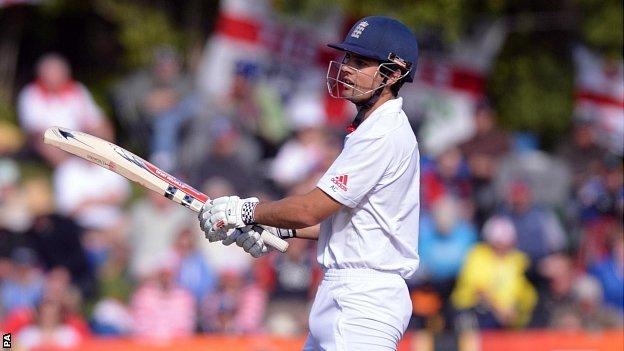 Captain Alastair Cook says England must shake off their habit of making a poor start to Test series abroad.

England fought back to salvage a draw in Dunedin after being bowled out for 167 - the fourth time in a row they have posted less than 200 in the first innings of the opening Test of a tour.

"It is a concern," said Cook. "I'm not quite sure we know the reason for it.

"I thought we did well to claw it back but we've been lucky certainly, in one sense, to escape with a draw."

After the first day was washed out, England were bundled out in 55 overs, with several batsmen falling to reckless shots.

England have failed to pass 200 in the first innings of the opening Test on each of their last four tours:

"You can give credit to New Zealand and the way they bowled and put us under pressure, but the bottom line is we played a lot of soft shots and gifted them our wickets," added Cook.

"In the bigger picture we need to start better than that. It's a huge reminder that, if you don't perform, you don't deserve to win anything.

"But the character we showed to dig ourselves out of that hole is very pleasing."

After dismissing England cheaply, New Zealand racked up 460-9 declared to secure a first-innings lead of 293.

But England, led by centurions Cook and Nick Compton, fought back with the bat on the fourth day.

Nightwatchman Steven Finn added a gritty 56 off 203 balls on the final day as England advanced to 421-6, giving them a lead of 128 when New Zealand captain Brendon McCullum shook hands on a draw.

"We showed some good fighting spirit," said Cook. "That's twice we've had to bat to save a game recently - in Nagpur [to secure a 2-1 victory over India] and then here - and we can take a lot from the way we went about it.

"Any time you get nought for England [as Compton had in the first innings], you're under pressure in the second innings - and he played like he can.

"It's great that he's gone on to get a hundred - a hundred as an opening batter for England will give you a huge amount of confidence.

"Knowing you can perform at this level is a big mental hurdle for any batsman."

"England have been put under pressure and New Zealand had the better of the game but both teams will head to Wellington hoping for a bit more pace in the pitch."

New Zealand came in to the series ranked eighth by the International Cricket Council after two innings defeats by South Africa and with two of their frontline bowlers - Daniel Vettori and Doug Bracewell - out injured.

In that context, McCullum was delighted with his team's efforts.

"Another day of Test cricket would have been phenomenal but after the opening day was rained off we had to work out how we could condense a great game into four days. Overall it was a great start to the Test series."

Cook admitted he was relieved to be able to head to the second Test in Wellington - starting on Wednesday at 21:30 GMT - on level terms.

"They outplayed us," he said. "They got in a position to win the game. At no stage did we do that but the positives are that we made them fight very hard and it's still 0-0 going to Wellington."